He says the assertion of 'better days for service delivery' during apartheid is not solely based on race and colour. 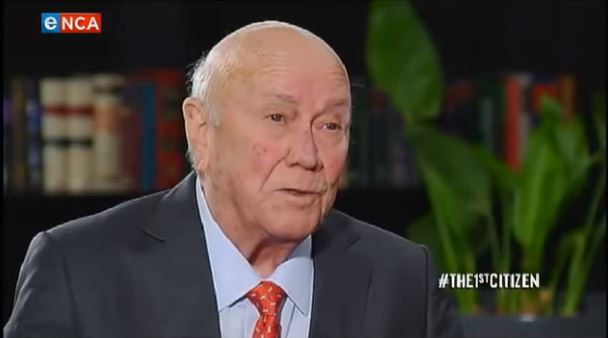 There remains an element of truth in that life and public services were better under the apartheid government as opposed to during former president Jacob Zuma’s rule, said FW de Klerk during an interview on Tuesday night.

De Klerk made it clear that he did not want to justify apartheid, and he had in fact abolished the system. He denied, however, that government during the apartheid years had worked only to benefit the lives of white people.

The last apartheid president pointed out that many services had run more efficiently under white minority rule, pointing to the example of Eskom, which had been fully functional with no blackouts at the time the country transitioned to democratic, majority government in 1994.

De Klerk, who was president from 1989 up until 1994, said the opportunity to build a truly non-racial society had been wasted during Zuma’s tenure (2009-2018) as president, as managers and others in decision-making positions had been appointed because of their connections instead of their knowledge and experience.

Speaking on an eNCA segment titled The First Citizen, he said the assertion of “better days for service delivery” and a better life during apartheid was not solely based on race and colour but in comparing the nine years Zuma was president.

He described Zuma’s tenure as nine lost years which had damaged the country due to bad appointments, as in cadres appointing cadres instead of people with the right experience.

EFF, ActionSA support could put DA in a corner, say analysts
7 days ago
7 days ago
PREMIUM!

EFF, ActionSA support could put DA in a corner, say analysts
7 days ago
7 days ago
PREMIUM!