The EFF leader says 'white people will continue to think that they are superior' unless the pattern of land ownership is changed. 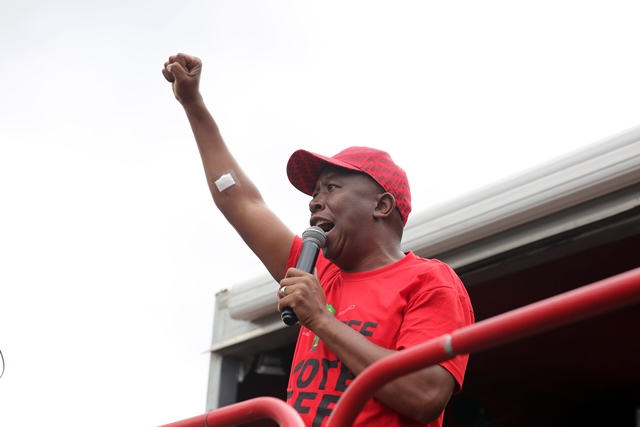 In his reply to President Cyril Ramaphosa’s third state of the nation (Sona) address in parliament on Tuesday, Economic Freedom Fighters (EFF) leader Julius Malema warned the president of chaos and bloodshed if he didn’t make good on the ANC’s commitment to expropriating land without compensation.

After painting a bleak picture of the lives of young South Africans today, Malema said the “issue of resolving inequality” will never “happen in South Africa … if we don’t resolve the land question”.

“We must, therefore, warn you that if you do not expropriate land without compensation and return it to its rightful owners, the democratic project remains under permanent threat,” Malema continued.

“Our people are going to engage in an unled revolution because there will be fighting for what rightfully belongs to them.”

Malema has made similar “unled revolution” comments before. In June 2018 during an in-depth interview with Turkish-based 24-hour news network TRT World, the firebrand politician issued the same kind of warning, saying South Africa would descend into an anarchic revolution if things continued the way they have.

“I can’t give you a guarantee of the future,” Julius Malema said. “Especially when things are going the way they are.

“If things are going the way they are, there will be a revolution in this country. I can tell you now. There will be an unled revolution in this country, and an unled revolution is the highest form of anarchy,” Malema said, in comments with parallels to his controversial statement that he and his party were not calling for the slaughter of white people “for now” – comments that saw him taken to the South African Human Rights Commission (SAHRC), although the complaint was dismissed.

Continuing with his Sona reply, the leader of the red berets accused Ramaphosa of not being sincere in his commitment to expropriating land.

He issued a “warning to the ANC that we can not use the land question to encourage people to vote for us, it is an emotive issue and when we speak about it we must be meaning it, not what you did to the electorate”.

“We will never resolve the social ills in our society if we do not resolve the land question,” Malema reiterated.

“If we do not change the patterns of property ownership in South Africa, white people will continue to think that they are superior because they own the means of production.”

He ended the part of his speech that addressed the land by expressing that he and his party were unapologetic for what some would consider incendiary rhetoric.

“We make no apology, neither are we ashamed to repeat the call that the land must be expropriated for equal distribution,” he said.

The only way to ensure a “quality life for our people is by giving them the land,” he added, expressing what he saw as the urgency of amending the constitution to allow for expropriation without compensation.

In March, the National Assembly adopted a report that delegated the task of drafting an amendment to the constitution to explicitly allow expropriation to the sixth parliament, which is now in session following the May 8 elections.

The report was agreed to by 210 votes to 61 with support from parties including the ANC and EFF, with the Democratic Alliance (DA), African Christian Democratic Party (ACDP) and Freedom Front Plus (FF+) signalling that they would continue to fight the proposed constitutional amendment.