Mkhwebane was ‘not honest’ in her SARB / Absa report, ConCourt rules

The public protector's attempt to appeal a high court ruling finding she must pay the SARB's costs has been dismissed. 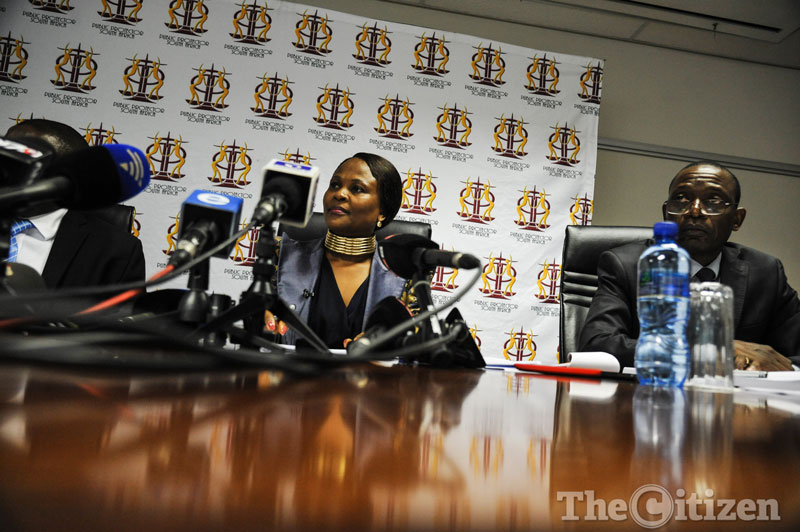 Advocate Busisiwe Mkhwebane, the Public Protector, is seen during a press briefing at her offices, 2 February 2017, Pretoria. Picture: Jacques Nelles

The constitutional court has upheld a personal costs order against public protector Busisiwe Mkhwebane, dismissing her attempt to appeal it.

The highest court in South African law also ruled that Mkhwebane was not honest in her investigation into an apartheid-era deal between the South African Reserve Bank (SARB) and Absa bank, that she acted in bad faith, that she fell “egregiously short of what is required” of her office, and that her report on the matter was flawed.

The damning judgement also found that Mkhwebane had “put forward a number of falsehoods” in court, “including misrepresenting under oath”.

The SARB’s application for a declaratory order to find that Mkhwebane’s investigation amounted to an abuse of her office was, however, dismissed.

She appeared at the court on Monday to find out whether the high court order that she should be held personally liable for the costs of the SARB – who managed to overturn the report she issued involving it – on a punitive scale stood.

The constitutional court ruled on the matter after earlier appeals by Mkhwebane in lower courts failed.

READ MORE: Absa denies that it refused to co-operate with Mkhwebane

In February 2018, the High Court in Pretoria ordered Mkhwebane to pay 85% in her official capacity and 15% in her personal capacity of the costs of the SARB on an attorney and client scale, including the cost of three counsel.

This is after the SARB, finance minister, National Treasury, and Absa, respectively, instituted review proceedings, challenging Mkhwebane’s report and requesting the court to review and set aside certain paragraphs of the report dealing with remedial action.

In June 2017, Mkhwebane had ruled that the South African government had improperly failed to implement the CIEX report, which dealt with allegedly stolen state funds and recover R3.2 billion from Bankorp Limited/Absa.

CIEX is a UK-based assets recovery agency which, in 1997, approached the government with a proposal to assist it in investigating and recovering misappropriated public funds and assets, that had, allegedly, disappeared prior to the coming into being of the democratic government in 1994.

The alleged debt arises from what has become known as the “lifeboat transactions” entered into during the mid-1980s between the SARB and several small banking institutions, including Bankorp, which was in financial distress at the time.

Between 1985 and 1991, the SARB had provided financial assistance to Bankorp in the amount of R1.25 billion, of which R300 million was at an interest rate of 3% per annum and the balance at 16% interest per annum.

Part of the agreement was that Bankorp would invest R400 million in the SARB. R600 million would be invested at 15% interest per annum, which would be used to buy government bonds to serve as security for the loans.

In April 1992, Absa Bank acquired Bankorp for an amount of R1.230 million. The acquisition of Bankorp by Absa Bank was conditional upon the existing financial assistance arrangements between the Reserve Bank and Bankorp being extended to Absa Bank.