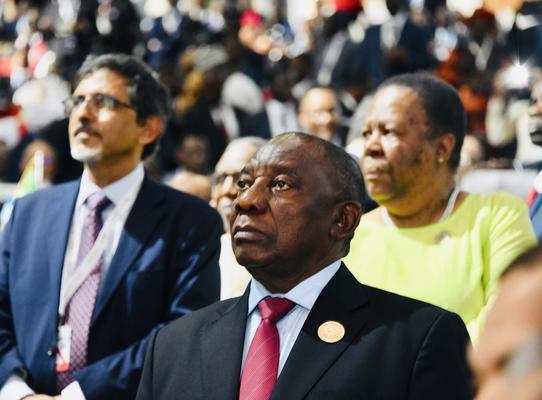 President Cyril Ramaphosa participates in the 12th Extraordinary Summit of the African Union (AU) in Niamey, Republic of Niger. The Summit will mark the entry into force of the Agreement on the Establishment of the African Continental Free Trade Area (AfCFTA) and will formally launch the operational phase of the African Internal Market. The Summit will also decide on the location and structure of the AfCFTA Secretariat. 07/07/2019. Picture: Siyabulela Duda

The African National Congress has released a statement saying it is of the view that leaked emails from Cyril Ramaphosa’s successful 2017 ANC presidential campaign is an an attempt to undermine public confidence in the president.

“The ANC is not aware of any acts of illegality on the part of a campaign conducted by any leader of the ANC, including President Ramaphosa. The leaked emails are therefore nothing but a calculated manoeuvre to defocus and detract from the immediate task of socio-economic issues and dealing with the challenges of our economy.

“This is also an attempt to undermine public confidence in President Ramaphosa whose leadership has been defined by moral and ethical conduct,” party spokesperson Pule Mabe said in a statement on Tuesday.

Over the weekend, News24 published a report which poked holes in Ramaphosa’s claim that he knew nothing about his campaign funding during the build up to the ANC’s 2017 national elective conference where he was elected party president.

Leaked emails News24 obtained showed that Ramaphosa was consulted by his campaign managers on certain potential donors, despite consistent denials from his team that he was not involved in any fundraising efforts.

The leaked emails formed part of Public Protector Busisiwe Mkhwebane’s report into DA and EFF complaints about a response Ramaphosa had given to DA leader Mmusi Maimane in Parliament in November 2018.

But it turned out the payment Maimane mentioned was actually a donation to Ramaphosa’s campaign for the party presidency from Bosasa CEO Gavin Watson – which Ramaphosa himself revealed in a letter to the speaker of Parliament.

Mkhwebane found that Ramaphosa had deliberately misled Parliament over the donation and in reaching her conclusion, she relied on the emails.

Ramaphosa has indicated that he intends to challenge the report in court.