Zuma supporters rally behind him in Hanekom R500K defamation case

'It's about time that [Hanekom] feels and realises the black power. We are going to be there in our numbers to support...Zuma,' the Radical Economic Transformation Champions said. 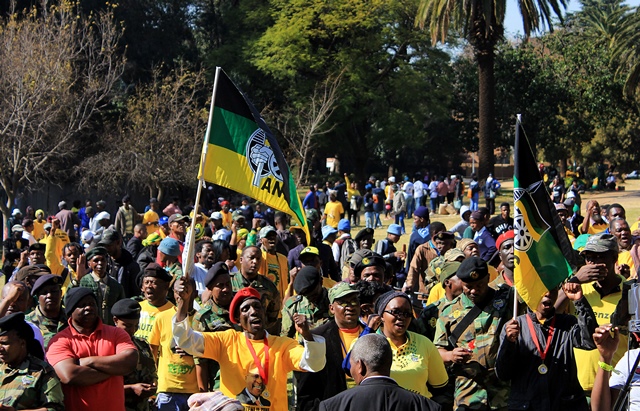 Former president Jacob Zuma’s supporters intend bolstering him again during his next round in court – this time as fellow ANC member Derek Hanekom is suing him for R500,000 for allegedly defaming him by tweeting that he is “a known enemy agent”.

“We vowed that we are going to be behind president Zuma through and through,” said Nkosentsha Shezi, the chairperson of the Radical Economic Transformation (RET) Champions.

“… We have noted with regret the fact that one who is supposed to be our own, Derek Hanekom, has taken president Zuma to court.

“And I think it’s about time that he feels and realises the black power. We are going to be there in our numbers to support president Zuma.”

Shezi said the fact that Hanekom “worked with the EFF to oust our own president” supported Zuma’s statement about him.

This refers to Hanekom allegedly handing a list to the EFF in a meeting ahead of a motion of no confidence in Zuma.

Hanekom denied this, but said he had met with the EFF’s Godrich Gardee as a “fellow MP”.

Reacting to Hanekom’s statement, Gardee said there were several meetings between the EFF, SACP leader Solly Mapaila and Hanekom.

Hanekom resigned as an MP shortly after the May 8 general elections.

When Shezi was asked whether Zuma should have settled his beef with Hanekom off-line, he said everybody had the right to tweet.

Meanwhile, Hanekom, who declined an interview with News24, stated in his affidavit that Zuma’s tweet not only damaged his personal reputation and his reputation in the liberation movement, but was also untrue and malicious.

He said that from being arrested for singing Christmas carols to a friend detained by the apartheid police at Johannesburg’s notorious John Vorster Square and again for standing in front of bulldozers demolishing homes in Cape Town, and being jailed for high treason, he had always been a loyal ANC member.

“I am not, nor have I ever been, a spy for the apartheid government,” stated Hanekom.

His application to the KwaZulu-Natal High Court in Durban follows a tweet by Zuma after his opening statement at the Zondo commission on July 15 in which he said his troubles as head of the ANC and state president were rooted in information that he had dating back to his time as head of intelligence for the party’s military wing, uMkhonto weSizwe.

He claimed there had been a decades-long plan to assassinate his character by intelligence operatives, and claimed Ngoako Ramatlhodi and Siphiwe Nyanda were recruited as apartheid spies. Both have denied this.

Zuma said he was eventually removed as president of the country in February 2018 because there were people in the ANC who were afraid he would spill the beans on their activities.

He added he had two lists containing names.

But Hanekom stated Zuma would not have personally thanked him for his contribution during the liberation struggle and appointed him as a minister and deputy minister if he truly believed he was an enemy agent.

He described himself as a loyal and disciplined member of the ANC and asserted Zuma’s tweet in an account with around 323,000 followers was untrue, malicious, and damaging to his reputation.

“The allegations contained in the statement are without any basis in fact. They are entirely false. I am not and have never been a spy for the apartheid government or any other authority for that matter,” his affidavit read.

Hanekom stated his high treason case was because he had put an assistant to an SA Defence Force (SADF) official in touch with the ANC leadership in Botswana during apartheid to get information on the SADF’s plans to support Renamo.

Renamo was a guerilla movement supported by the apartheid government at the time to undermine the Frelimo government of Mozambique. Frelimo had fought for Mozambique’s independence from Portugal, and its first president after liberation was the late Samora Machel.

The information about Renamo’s activities that Hanekom’s contact gave was passed on to ANC president Oliver Tambo, who in turned gave it to Machel.

Hanekom said a search for the source of the information was what led to Hanekom’s arrest in 1983 by the apartheid authorities and his subsequent imprisonment.

He was released in 1986 but his wife was deported to Zimbabwe in 1987. He accompanied her but his passport and belongings were stolen and the South African government would not replace it so he was exiled to Zimbabwe for three years.

He returned to South Africa in 1990 and was responsible for policy formation on land and agriculture during the negotiations before the first democratic elections in 1994. In 1994, he became a member of the ANC’s national executive committee, held three ministerial positions and one deputy minister position as well as serving as an MP for 25 years.

He is also the board chairperson of the Ahmed Kathrada Foundation.

“It is in light of this context and the sacrifices that I have made during my lifetime as an anti-apartheid activist, that the statement is particularly malicious and hurtful,” said Hanekom.

His affidavit also contains sample tweets by people who called him racist, a devil, and blamed him and his wife, Trish, for the disappearance of “thousands of freedom fighters”.

He said Zuma’s claim had undermined his contribution to the country, sought to strip him of his dignity, some in the ANC were treating him with suspicion, it could adversely affect the foundation, and had been a great source of stress and anxiety for him and his wife.

He wants an order that complies Zuma to remove the post about him, and tweet that Hanekom was not a spy, and be interdicted from publishing false statements again. The ANC said it respected and acknowledged “national executive committee [NEC] member Derek Hanekom’s bid to sue Zuma”.

The former president’s son, Edward Zuma, told News24 he had not spoken to his father about the issue, saying he was sure his father would comment on that “Hanekom character”.

News24 has reached out to the former president for comment and will add it when it arrives.