'Why must the courts have the final say in South Africa?' Masina asked. 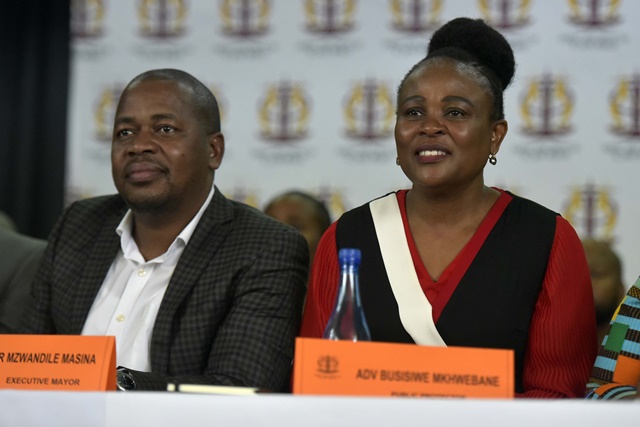 Public Protector Busisiwe Mkhwebane and Ekurhuleni Mayor Mzwandile Masina during an outreach programme at the Rabasotho Community Center in Tembisa, 21 August 2019. She was joined by the mayor of Ekurhuleni, Mzandile Masina to hear and provide solutions to the communities problems. Picture: Neil McCartney

Ekurhuleni Mayor Mzwandile Masina has come out in defence of Public Protector Busisiwe Mkhwebane, saying she is “under attack from everyone”.

Masina was addressing residents of Tembisa and surrounding areas during the Public Protector annual stakeholder roadshow on Wednesday.

“We know that the previous public protector [Thuli Madonsela] was praised by almost everyone, by all civic society, by all organisations, by government officials by politicians, by everyone.

“But what is very clear is that the Public Protector advocate Busisiwe Mkhwenane is under attack from everyone,” he said.

Masina said Mkhwebane should be allowed to do her work.

He said that when President Cyril Ramaphosa was asked by the public protector about the CR17 campaign, he should have “humble” himself and say, “No, public protector, it was political work”, instead of going to court and saying she was trampling on his rights.

“Where must the public protector go if her findings are reviewed otherwise by the courts? Why must the courts have the final say in South Africa?” Masina asked.

“It’s a critical question we have to ask, so that we then say how do we move South Africa forward.”

Following the roadshow, Mkhwebane told News24 that she believed that she was being attacked.

“I am under attack and it is a conditional institution. I am doing my work. I am trying to protect the people. I don’t think it is fair to be treated the way I am treated.

“I’m not going around and saying to people, lodge a complaint. Even with reports, I don’t go around and instigate. There are investigators who do the work and when they are done, they then summarise their evidence.

“I don’t go around and say ‘this one must be found to have committed any misconduct’,” she said.

Mkhwebane has lost a series of court battles challenging some of the reports released by her office and some involve cost orders in which she was found personally liable for some of the legal costs.

Recently, the Gauteng High Court in the Pretoria ruled that she must pay costs in a case relating to her investigation into the multimillion-rand Estina dairy farm scandal.

She has also been labelled “dishonest” by the Constitutional Court.