‘You are putting the cart before the horse,’ says Mantashe on bribery denial

On Tuesday morning, the minister addressed the portfolio committee on mineral resources and energy. 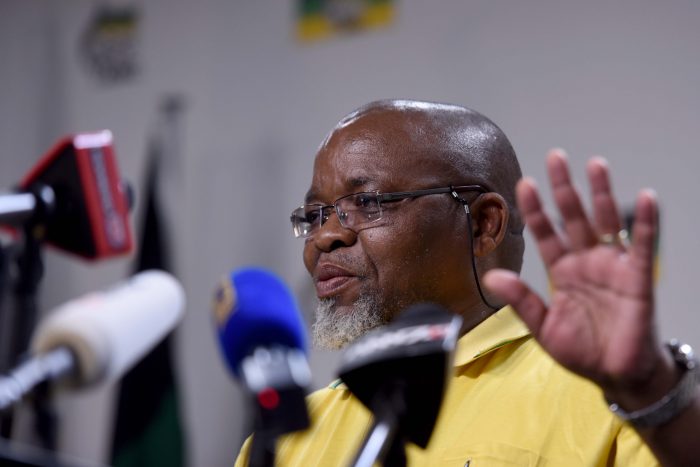 “You’re putting the cart before the horse,” said Mineral Resources and Energy Minister Gwede Mantashe in response to a question from a journalist in Parliament about whether he intended to sue the Sunday World newspaper.

The newspaper ran a story on Sunday quoting Mantashe saying that he bribed two of their journalists to bury a story about his sex life. On Tuesday, he released a statement, denying this.

But Sunday World editor Makhudu Sefara responded that they stood by their story and that they had recordings of him saying that he bribed the journalists. He challenged Mantashe to sue them, News24 reported.

On Tuesday morning, Mantashe addressed the portfolio committee on mineral resources and energy. After the meeting, journalists descended on him like hunters cornering a tiger.

He was asked to respond to the EFF’s call for President Cyril Ramaphosa to kick him out of the Cabinet, and the fact that the DA laid a charge against him at Parliament’s ethics committee.

“I can’t respond to something that has come to you and not to me,” he said.

Asked if he would take up the Sunday World’s challenge and sue them, he said: “You are putting the cart before the horse.”

Meanwhile, the South African National Editors’ Forum (Sanef) indicated in an open letter to Mantashe that it would, given the seriousness of the matter, write a letter to Ramaphosa to “express [their] deep concern about the claims against” Mantashe.

“We eagerly await for the truth to emerge and Sanef believes that it is imperative that you verify – under oath – which version of events is, in fact, correct and why you have made two contradictory statements.

“Allegations of bribing journalists are a blight on the media industry and cause irreparable damage to our fight for media freedom.

“It is therefore important that this issue is swiftly and decisively dealt with,” reads Sanef’s letter.

The forum will also ask retired Judge Kathleen Satchwell, who is chairing its independent Inquiry into Media Ethics and Credibility, to investigate the matter.

“We will also be asking Judge Satchwell to look into the prevalence of ‘brown envelope’ journalism across the industry,” reads Sanef’s letter.

“It is [unacceptable] to us that any South African, and especially a sitting Cabinet minister, would allegedly bribe journalists to quash a story about them.”