BLF mulls whether it should go ‘underground’, with ‘armed struggle’

'The anti-black government has banned our movement as part of the campaign to destroy the pro-black revolutionary moment,' BLF leader Andile Mngxitama wrote. 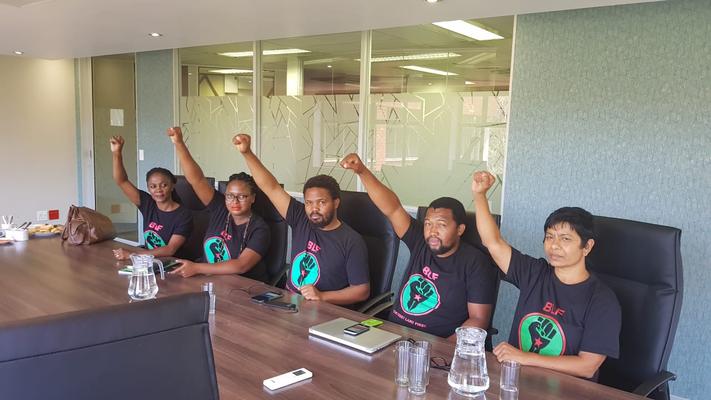 Black First Land First on Friday staged a sit-in at the Zondo Commission demanding the immediate suspension of the secretary of the commission, Dr Khotso de Wee. In the photo, BLF leader Andile Mngxitama (centre) raises his fist and is seated on the 3rd floor of Hillside House, where the Zondo Commission is sitting, 18 January 2019. Picture: Supplied by BLF

The Black First Land First (BLF) movement is set to debate whether it should call it quits or to go “underground” at its special policy conference set down for November 30 in Durban.

This comes on the back of numerous losses in its bid to remain a legitimate political party in South Africa.

On Monday, the Electoral Court rejected the BLF’s application to appeal its deregistration.

In July, the Electoral Commission of SA (IEC) announced that it would deregister the party. This after the Freedom Front Plus had lodged a case against the BLF after finding out its constitution only allowed black people to join.

In terms of Section 16(1)(c) of the Electoral Commission Act (Act 51 of 1996), the IEC may not register a political party that excludes membership on the basis of race, colour or ethnicity.

The BLF participated in the 2019 elections and only managed to garner 19,479 votes. It failed to secure a seat in parliament.

“The anti-black government has banned our movement as part of the campaign to destroy the pro-black revolutionary moment,” wrote the organisation’s leader, Andile Mngxitama, in the president section of its discussion documents.

Insisting that the BLF has been banned, the documents propose three possibilities for members to deliberate on, while plotting the organisation’s next chapter.

The documents propose the BLF either be dissolved and go underground, amend its constitution while keeping its pro-black posture or explore both ideas simultaneously.

“This option is historically triggered when the democratic space for participation is shut down,” explained the movement.

It added such a decision also required an assessment of whether an armed struggle was required.

“Taking up arms shall mean that the BLF is dissolved as an above-ground political organisation, goes underground and forms a people’s army,” continued the document.

On amending the BLF constitution, it said this would mean aligning the movement with the “anti-black constitution”, while retaining a pro-black essence.

It called on members and supporters to discuss the nature of the amendment, suggesting that this option would also have to be accompanied by an application to the Constitutional Court to have sections of the electoral act declared unconstitutional.

The documents also claimed that armed resistance and electoral participation do not have to be mutually exclusive, saying members could ask for the party to remain above ground and participate in elections, while having an underground armed structure.

“There shall be structural separation of the two arms but ideological unity,” it said in the document, while the armed wing would be an autonomous body.

The BLF will hold its special elective conference at the end of November.

Shortly after news of the party’s deregistration was announced, the FF Plus issued a statement calling the decision a “victory for the whole of South Africa”.

FF Plus leader Pieter Groenewald said: “The deregistration of the BLF as a political party is a victory for the whole of South Africa because racialism and intolerance, as was incited and encouraged by Mngxitama and his supporters, will not be tolerated. The successful application is also a victory for law and order. The FF Plus has spearheaded this case since January this year for the sake of law and order.”