The meeting is expected to also focus on the National Treasury's blueprint, which Tito Mboweni is hoping government will adopt to avoid an economic meltdown. 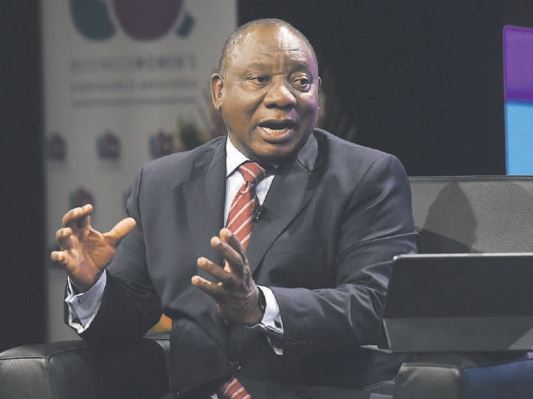 President Cyril Ramaphosa in dialogue on 29 October 2019 with women in Johannesburg on pertinent issues that affect their role and contribution to the economy. Picture: Nigel Sibanda

Maximum alliance unity – this is what the ANC’s allies are hoping will be achieved when they meet for a political alliance council gathering on Sunday.

The governing party, trade union federation Cosatu, civic organisation Sanco, and the South African Communist Party (SACP) are set to discuss the state of South Africa’s ailing economy, along with measures which can be adopted to reignite it.

The meeting is expected to also focus on the National Treasury’s blueprint, which Finance Minister Tito Mboweni is hoping government will adopt to avoid an economic meltdown. Alliance partners were less than pleased after Mboweni released the document and opened it up for public input without it first being approved by the ANC’s allies.

Last month, the ANC held a special national executive committee (NEC) meeting, where Mboweni apologised for going public before it was dealt with inside the liberation movement.

“Powerful attention needs to be given to the economy and for this to happen it requires the unity of the alliance,” said SACP spokesperson Alex Mashilo.

He said maximum unity of the alliance was a necessity in order to get the rest of the country united behind the ANC and its allies’ economic reform plans.

“No way the economy will perform better, unless radical measures are adopted, unless there is alliance unity, and unless that unity translates into broader social measures to turn around our country,” Mashilo said, emphasising his point.

“It’s one thing to discuss measures around the economy and another to be united around measures identified,” he continued.

The SACP spokesperson said previous calls for the reconfiguration of the alliance remained relevant.

The communist party, Cosatu and Sanco – who threw their weight behind current party president and head of state Cyril Ramaphosa, when he contested to take over from former leader Jacob Zuma in 2017 – have been calling for the ANC to involve them more when making key decisions, such as policy positions and cadre deployment.

“Relating to all these matters is alliance reconfiguration. The point of unity and the optimal impact of the alliance organisation is all interrelated,” said Mashilo.

While he refused to divulge what was on the agenda for the alliance meeting, he reiterated that although dialogue remained critical, it had to also translate into a unifying radical programme.

Cosatu spokesperson Sizwe Pamla said it was important for the tripartite alliance to emerge from Sunday’s sit down with a coherent message on how to approach challenges posed by the country’s economy.

He said the meeting would allow for everyone in the liberation movement to get a sense of priorities.

“It is troubling that in the investment summit, no one seemed to have an appetite to discuss the issue of a state bank,” he remarked.

Ramaphosa held his second investment summit, where he raised well over R300 billion in investment commitments from numerous big players during the week.

“We thought this was an ANC resolution. Treasury said it was investigating it, but Treasury doesn’t seem to want the state to have any role in kickstarting the country’s economy, and only suggests it must provide an enabling environment for this to happen,” Pamla said, raising some of the federation’s concerns.

He said Cosatu needed to go and remind the ANC that the state bank was one of its own conference resolutions – to build a developmental state – and that it needed to remain on the agenda, without the governing party having to outsource the task to the private sector.

While the ANC presented a picture that all parties were on the same page following the special NEC meeting on the economy – and fully in support of Treasury’s document on economic reforms – Pamla said the federation felt there was some miscommunication and context taken out of that conversation.

“They had acceded to our demands, 80% of what we demanded we had … They agreed on keeping labour market issues out of the paper. ANC said public service issues must go to the right platforms, such as your Nedlacs,” he said, referring to the development and labour council.

Pamla added that the ANC hadn’t come right out saying its government would auction power stations.

The ANC did not respond to requests for comment before publication. Should the party respond, these comments will be added.