Premier Refilwe Mtsweni is accused of using her powers to frustrate Cogta head Peter Nyoni in a bid to control the party’s second largest province. 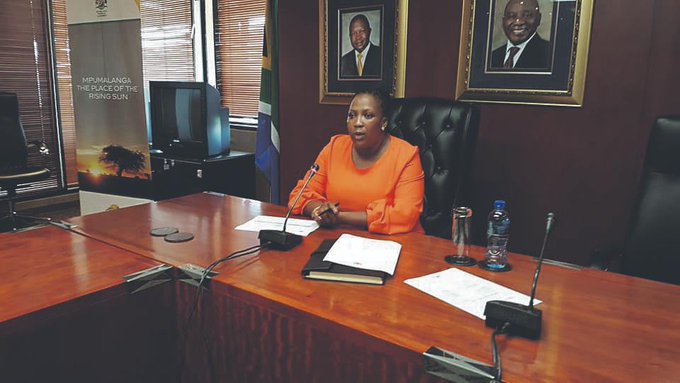 Some ANC members in Mpumalanga have accused Premier Refilwe Mtsweni of using her powers to frustrate Department of Cooperative Governance and Traditional Affairs head Peter Nyoni in a bid to control the party’s second largest province.

Nyoni is part of a slate that includes former provincial secretary Mandla Ndlovu who is set to contest the provincial leadership when Mpumalanga finally sits for an elective conference early next year.

The purported slate has been seen as not only a viable alternative to Mtsweni, but a real chance to shake off former provincial chairperson and now Deputy President David “DD” Mabuza’s hold on the province.

He has since fallen out of favour with some of his allies at national level, with the likes of Ndlovu, who was once a well-known Mabuza ally, having been said to have now become closer to the ANC’s current secretary general Ace Magashule.

Some of Nyoni’s backers have told News24 they believed his role at the department was being used in the battle, with others have accused the premier of refusing to renew his contract for three more years as part of a political game.

“He has been consistent in his role as head of department, yet he is the one being punished by the premier, this can only be because she fears Nyoni and is attempting to deal with him,” said one of his lobbyists.

Others in the province have called for a unity slate, saying whenever the province sat for a conference it should produce a unified leadership that kept the ANC alive in Mpumalanga.

“I don’t really care how it’s done, but those people must find one another, they must talk and find a way forward,” said an insider who did not want to be named.

The Ehlanzeni region, which has merged with Botshabelo, is due to go to conference and elect new leadership. This has been delayed and the area is due to receive a visit from Magashule

While Nyoni does not fully agree with this view, he told News24 at times government contracts such as his were being used to “politically manage” opponents.

He, however, insisted he did not want to believe the premier would do such a thing to him.

“The expectation here was that I would have been granted three more years, but the contract had been extended until November and now again until February,” said Nyoni.

He also acknowledged nothing was owed to him as he had originally signed a three-year contract, which has since lapsed.

Mtsweni, in her response, rejected claims that Nyoni’s contract had not been renewed due to political considerations.

Through her spokesperson Sibongile Mkani-Mpolweni, Mtsweni said Nyoni was not the only head of department offered monthly contracts.

“The premier also respects the confidential nature of the terms of employment of accounting officers. As such, it would be remiss for the premier to comment on the duration of Mr Nyoni’s contract on a public platform,” said the premier.

And while she emphasised her decisions were not made for political expediency, Mtsweni said she respected the distinction between party and state.