The EFF said it rejected the 'herd voting system' introduced in parliament as 'it is beginning to undermine constitutional rights and freedoms'. 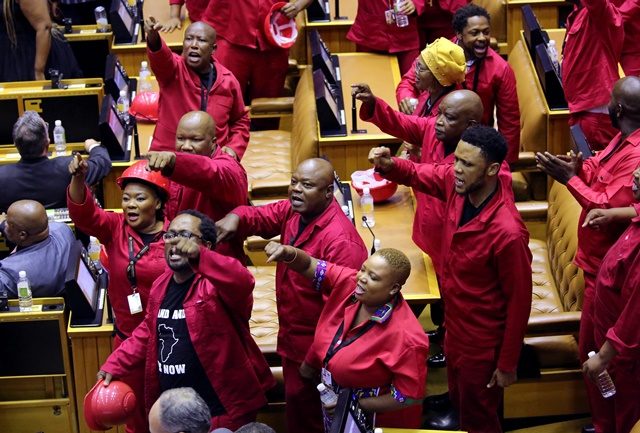 The EFF have announced it will approach the courts to challenge a parliamentary ruling in which “MPs were forced to vote through their chief whips during a division”, on Tuesday.

In a statement, the party said according to the rules of the National Assembly a division necessitated a motion or a bill be voted for individually by each MP.

“Voting in the House has to be conducted in a free and fair manner. Above all, once in the house, MPs cannot be treated as members of a caucus, members of a chief whip or members of a party,” the statement read.

It was earlier reported the National Assembly had adopted rules for virtual meetings.

The EFF questioned in terms of which rule this took place, but the National Assembly has rules for unforeseen eventualities, which applied in this case.

The National Assembly also had its first votes in the virtual environment.

The EFF said the virtual method – which the ANC was failing to execute in line with the constitutional mandate of parliament, particularly in the interest of a free and fair democratic process – was currently not working.

“In fact, it is beginning to undermine constitutional rights and freedoms.

“We have long written to the Speaker that parliament must be relocated to Pretoria to continue its business in line with social-distancing rules. That way, the executive can be openly held accountable for all its decisions including Covid-19 regulations and the lockdown.”

The EFF said it rejected the “herd voting system” introduced in parliament and called for the physical reconvening of it in a space where the government was and easily accessible to all.

“Herd voting deprived members of their democratic rights and that’s what the Constitutional Court discouraged in the secret ballot judgment.

“We have therefore taken a decision to challenge today’s vote on virtual rules to court. Our prayers will be unequivocal, that the method applied by the House chairperson, in the name of the Speaker, to conduct the vote during a call for a division, is unconstitutional.”

On Tuesday, three bills – the Recognition of Customary Marriages Amendment Bill, Prescription in Civil and Criminal Matters (Sexual Offences) Amendment Bill and Social Assistance Amendment Bill – were passed and will be sent to the National Council of Provinces for consideration, following the disagreement on the voting.