Scores of the ANC secretary-general's supporters, calling themselves Radical Economic Transformation (RET) Forces, had come out in their numbers, defying the Disaster Management Act. 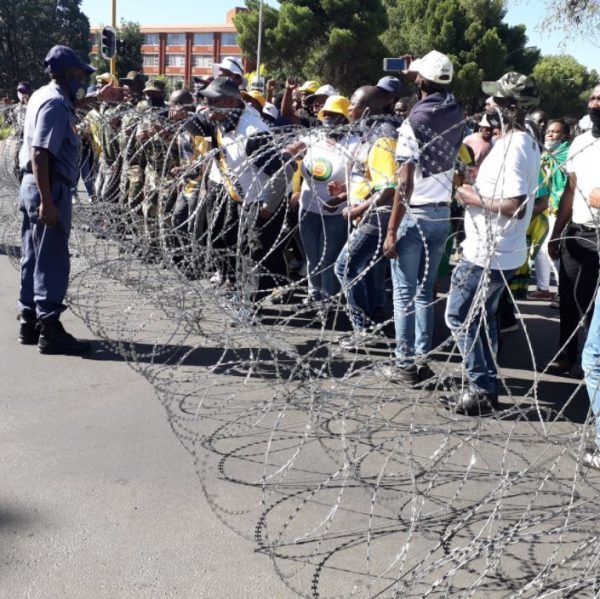 Supporters of Ace Magashule outside court in Bloemfontein on 19 February 2021. Picture: Twitter

Supporters of the ANC secretary-general Ace Magashule were left disappointed on Friday when he could not address them following his appearance at the Bloemfontein Magistrate’s Court on charges relating to the R255 million asbestos-eradication contract in the Free State.

MKMVA reacts to the postponement of the asbestos case against ANC SG #AceMagashule and his co-accused.

Tune into Newzroom Afrika on DSTV channel 405 for more. pic.twitter.com/LNgI8kZkwP

Scores of supporters calling themselves Radical Economic Transformation (RET) Forces had come out in their numbers, defying gathering regulations of the Disaster Management Act.

“We are requesting comrades to close the programme even without starting,” former Nelson Mandela Bay councillor, Andile Lungisa, told the crowd outside the court.

“We are looking forward to the 11th of August”- Ace Magashule.

Tune into Newzroom Afrika on DSTV channel 405 for more. pic.twitter.com/2VXcY6AN1T

ANC spokesperson Pule Mabe stressed that people should stay within the confines of the law when showing their support.

“The call we are making to anyone that might be coming through to show or display their support is that such must not go against the decorum of our own law-enforcement agencies. There has got to be order where people display support they must do it in an orderly manner and respectful manner so that it doesn’t create unnecessary raucous,” he said.

The magistrate’s court moved the case to 11 August 2020 for pre-trial at the Free State High Court.

There were three additional accused added to the case, namely Nozipho Belina Molikoe, Thabiso Makepe and Albertus Venter. The three were all granted bail of R50,000 each.

National Prosecuting Authority(NPA) spokesperson Sipho Ngwema chats to Sbu Ngalwa after the asbestos case against ANC SG #AceMagashule and his co-accused was postponed to August 11. The case has also been moved to the Free State High Court.

“They are all charged with more than 70 counts of fraud, theft, attempted theft, corruption in contravention of the Prevention and Combating of Corrupt Activities Act, money laundering and contravention of various Asbestos Regulations, promulgated in terms of the Occupational Health and Safety Act 85 of 1993,” the National Prosecuting Authority said in a statement.