Geoff Makhubo surrendered his life to the cause of all humanity, says Mashatile 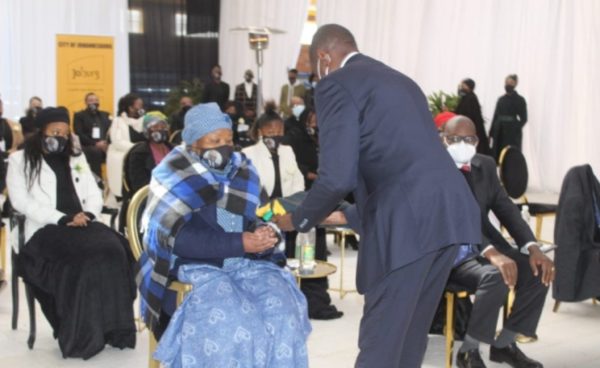 ANC treasurer-general Paul Mashatile has paid tribute to late Johannesburg mayor Geoff Makhubo, describing him as a genuine friend, patriot and true comrade to the end.

Speaking at the funeral service for the mayor held in Soweto on Wednesday, Mashatile said the ANC had lost one of its finest leaders who was hard working and always dependable.

“He was there in the student struggle, he was there in the youth struggles [and] he rose through the ranks of our liberation movement up to a point where he led the ANC in Johannesburg. He placed a high premium on the unity of the ANC and the alliance,” Mashatile said.

Makhubo succumbed to Covid-19 complications last week in hospital at the age of 53.

Mashatile said the ANC was deeply touched by the mayor’s sudden death, saying he was a “rare jewel” and had a “razor-sharp mind”.

“We were shaken to the core, for he left us at a time when the people of South Africa and his movement, the ANC, were still expecting much of him. However, comrades, it is not our part to mourn.

“Rather it is our right and privilege to celebrate the fact that we were in the company of so rare a gift of a fellow South African who was simultaneously a genuine friend, a dependable colleague, an activist and a leader, a patriot, an internationalist, a human titan who surrendered his life to the cause of all humanity. A principled revolutionary and a true comrade to the end,” he said.

The ANC treasurer-general said Makhubo was at the forefront of fighting the Covid-19 pandemic, and encouraged Johannesburg residents to adhere to non-pharmaceutical onterventions to curb the spread of the virus.

“Comrade Geoff died facing a deadly pandemic head on. He spent a lot of time urging communities to act in a manner that will ensure the limit of the spread of this virus.

“His death is a reminder that we have a responsibility to remain vigilant and do everything necessary to deal with this pandemic,” Mashatile said.

Makhubo was laid to rest at Westpark Cemetery.