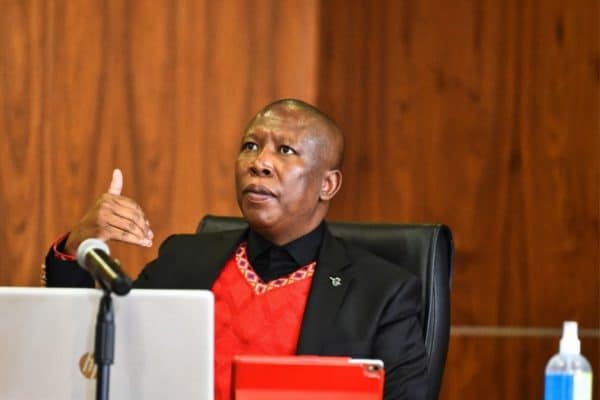 The party leader began his Malema on Kaya interview by commenting on the outcome of the CR17 bank statements court matter which took place the morning of his interview. He expressed his disappointment in the outcome of the case, particularly the fact that the case was dismissed with costs.

Malema said that he felt as though this outcome would discourage people from holding those in government to account because of the financial implications of taking on similar cases.

However, the party’s leader vowed that the EFF would forge on in their fight to get the bank records unsealed.

Malema claimed that judges and politicians were implicated in certain documents attached to the bank statements, which have been labelled highly sensitive and have been pegged as the main reason for why the documents cannot be unsealed.

“The president himself got elected under the banner of transparency. He should be an applicant with the EFF, demanding that the CR17 documents must be released so that people can know what is contained in those documents.”

RELATED: Elections unlikely to be free and fair if held this year states Moseneke

During the Malema on Kaya interview, Dhlomo made a case for Ramaphosa who had claimed that he himself had no idea who his donors were, as he was not hands-on on that part of his campaign.

“There’s a rumour that he wrote emails to the donors thanking them” began Malema, before adding “only if they reveal those documents will we really know.”

He also recalled “calling Ramaphosa out” in parliament regarding funds from the CR17 bank account, that the president allegedly used to assist two EFF members with some financial difficulties they were facing at the time.

Further commenting on the matter of how campaigns are financed during the Malema on Kaya interview, Malema said that he personally would not accept campaign donations from unknown places as he feared accepting “blood money.”

Dhlomo then quizzed him on the EFFs ties to Adriano Mazzotti in relation to that statement.

“Do you know that Adriano Mazzotti has never been arrested or charged for any crimes since he has been in existence?” responded Malema.

“I actually met him in the ANC, he was a member of the ANC when I met him and I introduced him from the ANC to the EFF”

Malema went on to ask why law enforcement has not taken Mazotti into custody if he has done all the things he has been accused of?

He went on to say that the EFF would not exist without Mazotti because no one else was willing to provide the EFF funds required to establish the party formally.

At the time of writing, Malema was still in studio.