EFF accuses ‘dangerous’ Dlodlo of lying to Parliament, calls for her axing

The EFF agrees with Bheki Cele that police were never provided with intelligence reports about the riots. 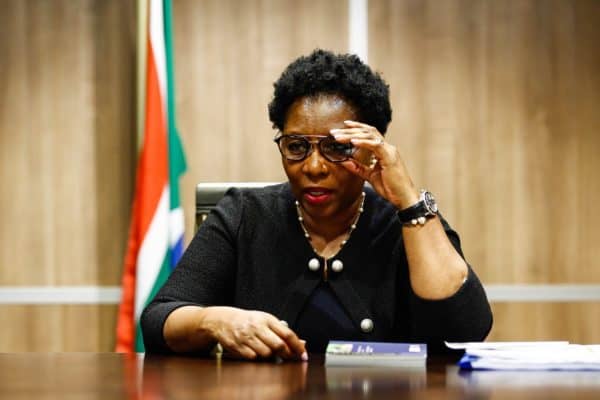 The Economic Freedom Fighters (EFF) has called on President Cyril Ramaphosa to fire State Security Minister Ayanda Dlodlo, for allegedly misleading the country and Parliament about the existence of intelligence prior to the deadly civil unrest that left a trail of destruction in KwaZulu-Natal and Gauteng last week.

The Red Berets have disputed the minister’s claim that the State Security Agency (SSA) had intelligence on the riots, and have even gone as far as to call for her impeachment.

Ministers in the security cluster have been at loggerheads over their contradictory messages on the unrest that Ramaphosa characterised as a “failed insurrection”, following the incarceration of former president Jacob Zuma for contempt of court.

ALSO READ: Calls grow for Ramaphosa to get rid of Cele, Dlodlo and Mapisa-Nqakula

Dlodlo and Police Minister Bheki Cele have recently been at odds on whether the South African Police Service (Saps) was provided with intelligence reports about the violence that left more than 200 people dead, with Dlodlo insisting that police had such information.

The EFF says it wrote to Dlodlo last Friday, requesting that she provide evidence that her department possessed such intelligence and forwarded it to Saps, but she had not responded to their questions.

Despite this, the party said it could confirm that such information was never shared or given to Parliament’s joint standing committee on intelligence, as well as Saps, even though officials of the SSA have said so.

“The implications of minister Ayanda Dlodlo’s statement is that government knew about the possible blockade of roads and attacks on malls as instigations for a riot or public unrest, but elected to do nothing, which amounts to treason,” the EFF said in a statement.

“Over 200 people lost their lives, and thousands more their livelihoods have been destroyed. If government allowed this to happen, then it has perpetuated a crime against humanity and those responsible must be held accountable.”

The EFF insisted that Dlodlo and her department were still unable to provide Parliament with “any shred of evidence to support any of the claims that they informed government about the planned activities and that government elected to ignore or do nothing about them.”

“This is evidence of how dangerous Minister Ayanda Dlodlo is to the national security and stability of our country. She is part of the information peddlers who lie to our people to protect their utter incompetence. She has misled the public, and her officials in the SSA have deliberately misled Parliament in order to hide their utter incompetence and negligence.

“It is a fact that intelligence agencies of our country did not foresee any of the key events leading or sparking the riots. They are all dysfunctional, internally compromised by infiltration and fractionalisation. They have all been incapable of doing their duty on the ANC factional battles and the threat they pose to national security and stability.”