The party compared the Israel-Palestine crisis to 'banditry and inhumanity that apartheid South Africa became the skunk of the world and was boycotted and shunned internationally'. 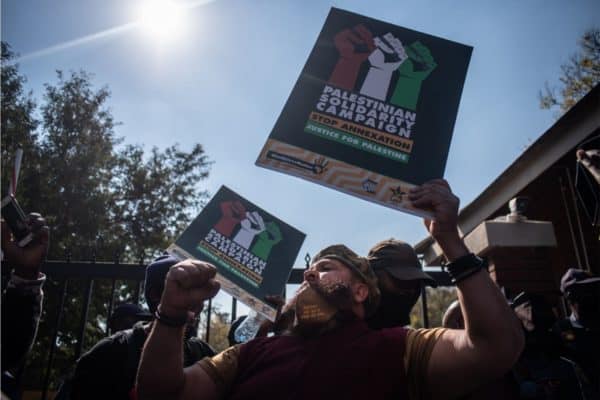 ANC supporters protest outside the Israel Embassy in solidarity with the people of Palestine who have been subjected to continuous attacks by the Isreali government, 25 May 2021, Pretoria. Picture: Jacques Nelles

The country’s ruling ANC and the South African government have taken a dim view of the African Union (AU) Commission’s recent decision to grant observer status to Israel.

In a statement released by the ANC on Tuesday, the party said it was “astounded” by the commission’s call, especially in light of air strikes and bombings on Palestine and occupied Palestinian territories.

If a region is granted observer status, this gives them an opportunity to participate in the body’s activities. It is given to organisations or countries with an interest in a commission or organisation’s activities.

The bombings, categorised by Amnesty International as “institutionalised discrimination”, have displaced hundreds of Palestinians in Israel and the occupied West Bank, which includes East Jerusalem.

Countless people have lost their lives, and irreparable damage has been caused to homes and social infrastructure.

“The recent bombings and killings of Palestinians, the destruction of their properties… are examples of Israel’s flagrant disregard for the international community and international protocols, including the AU and UN tenets on human rights.”

The party compared the Israel-Palestine crisis to “banditry and inhumanity that apartheid South Africa became the skunk of the world and was boycotted and shunned internationally”.

They have urged the AU secretariat to “urgently reconsider and reverse this reckless and unwise decision”.

The South African government said the commission’s decision was “inexplicable” and “offended” the spirit of the AU’s charter.

The government has said it would ask the commission’s chairperson to brief member states, and to facilitate a discussion by the union’s executive council, and assembly heads of states and governments.

“South Africa firmly believes that as long as Israel is not willing to negotiate a peace plan without preconditions, it should not have observer status in the African Union.

“The African Union cannot be a party in any way to plans and actions that would see the ideal of Palestinian statehood reduced into balkanised entities devoid of true sovereignty, without territorial contiguity and with no economic viability.”