Zuma not under house arrest, so butt out, says daughter

The former president's daughter seems keen to nip ongoing speculation about her father's post-prison life in the bud. 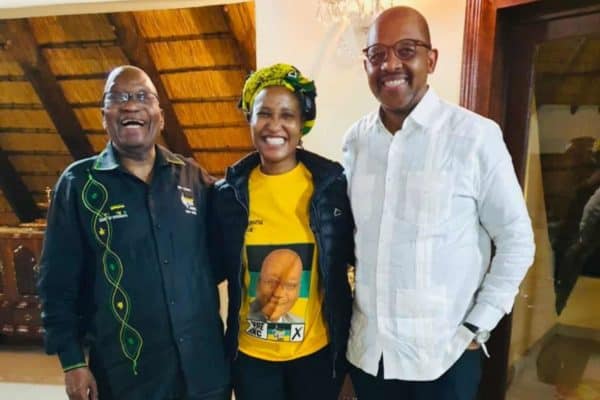 In an annoyed tweet on Saturday afternoon, former president Jacob Zuma’s daughter Duduzile Zuma-Sambudla pre-empted articles apparently being worked on by two Sunday newspapers about speculation around the conditions of her father’s medical parole.

She pointed out that he wasn’t under house arrest and they had no right to pry about his parole conditions.

It was announced at the start of September that Zuma was being released from imprisonment on medical parole, for an as-yet-undisclosed illness.

He made a video-link appearance this week at a prayer meeting in his honour in KwaZulu-Natal, which saw much of the crowd leaving due to disappointment that he was not there in person amid heavy winds buffeting the People’s Park near the Durban beachfront.

AFP reported this week that, officially, no one yet knows where the 79-year-old is serving his parole, which was granted just two months into his 15-month prison sentence for contempt of court.

He used the occasion to rail against his imprisonment and repeat the contention that he’d been imprisoned “without trial”. He also ostensibly campaigned for the ANC while complaining about the treatment he had received at the hands of the ANC-led administration.

“Today I wish to address my gratitude for your support and prayers,” Zuma told the event organised by the Jacob G Zuma Foundation. “As a prisoner of the democratic state in which the black majority controls the levers of state power, the fact that you have come to support me with prayers means a lot to me.”

He lambasted the judiciary for ordering his imprisonment and criticised the corruption investigations against him. He also urged voters to choose the ANC again, however, during local government elections on 1 November.

“I remain a prisoner under very strict parole conditions,” he said. “It feels like what house arrest and banning orders must have felt like during colonial apartheid government.”

It’s generally understood, but not confirmed, that Zuma is serving his parole at his Nkandla estate.

Recently suspended and reinstated ANC member Niehaus said on Thursday that Zuma was doing well under the circumstances.

“His health is still improving. It’s going better. We are glad he got medical parole,” he said.

On Saturday, the outspoken Duduzile tagged two Sunday papers to declare that Zuma was not under house arrest and that they should stop trying to discover the terms of his parole, which have not been made public.

“My Father Can’t Be Your ONLY Newsmaker,” she added. “There Are Taxi Wars Happening And Ministers Being Taken “Hostage”.” The latter was a reference to a showdown that took place between members of Cabinet and former military veterans demanding millions in compensation from the state.

Many of her followers supported her, though others pointed out that they deserved to know what was happening with Zuma since taxpayer money was involved.

Last month, Duduzile called the ANC under President Cyril Ramaphosa’s leadership the “Apartheid National Congress”.  She even went so far as to redo the ANC’s colours by replacing them with those of the former national flag.