One thing Change doesn’t promote is for residents to be neglected. 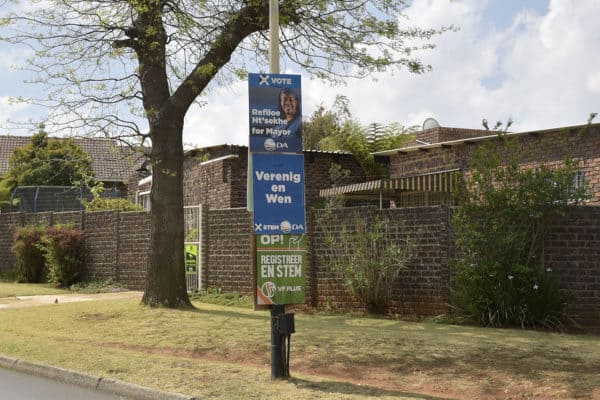 Election posters on streetpoles in Edenvale, 4 October 2021 ahead of elections . Picture: Neil McCartney

Until election day on 1 November, The Citizen is opening up space for political parties and independent
candidates to promote themselves and their platforms – in their own words.

To level the playing field, all parties and independent candidates will answer the same five questions in a maximum of 150 words per question.

If you wish to take part, please e-mail: amandaw@citizen.co.za

1. Complete the statement: I believe that Change party is the best to elect to run the municipalities because…

Although we have not been in any government office, Change was formed at a time where South Africans are in desperate need for a socio-economic change.

Change’s approach is that of identifying and uprooting what is at the foundation of the country’s demises. For example, we know corruption is not the main problem, but the problem is what causes it.

One of them being the loveless, heartless, and self-centred government officials. Change will not deal with surface matters but will radically push for total overhauling of the municipal human resources structures in order to effect the change the residents need.

We are a team of ethical and compassionate South Africans determined to fearlessly bring about a radical paradigm shift.

2. How do you intend to cut municipalities’ costs, such as excessive salaries, vehicle allowances, staff complements and the like?

The municipalities have been identified as the worst-performing government sections and this is mainly due to laziness, maladministration, lack of accountability, as well as jobs for friends and comrades.

Under Change, only the suitably qualified officials, by way of skills, experiences and education, will be appointed, paid and given minimum incentives guided by their qualifications.

The party will also stop the wasteful functions where millions of rands are spent for catering and accommodation.

We will also stop tenders. They are nothing but the milk cows hitting the municipalities’ coffers with nothing to show but the many unfinished constructions.

Councillors will, first of all, not leave their places of residence in their first term.

This will help them identify with the challenges faced by their communities and thereby cutting the lengthy system of reporting.

With Change, the community is the boss and councillors are the servants. They will have monthly report back meetings with the communities as a way of getting in contact with them.

One thing Change doesn’t promote is for residents to be neglected. This is why we have a rule forcing councillors to stay in their communities.

4. People are broke and battling to pay their municipal bills and unemployment is at a record high. What are your plans to stimulate the local economy and help ratepayers meet their obligations?

If the government is able to help the unemployed with the R350 Covid relief grant, then the government can be able to subsidise low-income-earning families and help them meet their municipality obligations.

It is unfair for the government to expect a family earning less than R4 000 a month to be charged the same way as the high-income earners.

We are aware of the indigent plan going on, but this is not addressing the needs of the people as it mainly focuses on the elderlies. Our party will change this to ensure everyone who is in need gets help.

We will also stop Eskom from punishing the citizens with their exorbitant tariff hikes for its own failures. While doing this, we will push for each household to be fitted with solar energy systems adding up to current power supply.

We will boost township economy by first reviewing the bylaws and make them conducive for the people to run their small businesses. We will encourage private companies to adopt the small businesses and help them with skills development and financial needs.

Change will review all the municipality contracts with the refuse removal companies. We will bring new companies that will not subject the residents to unclean environments.

We will do away with tenders. They have benefited the few and they are somehow some of the reasons for the economic meltdown.

The experts in the employ of the municipalities should not be paid to monitor tenders but to do the work of ensuring potholes are repaired and streetlights are well functioning.

This will provide jobs for some of those who are unemployed. We will start with the process of ensuring that all the informal settlements have proper streets, are electrified and have proper sanitation.

We will act on our plan to remove street kids from the streets to proper homes as they have a right to shelter, and also act on the remedial action for the sewage spillages in most of the townships. This will help retain dignity to the people.