EFF leader Julius Malema says the Red Berets will not vote nor support ANC candidates in all municipalities. 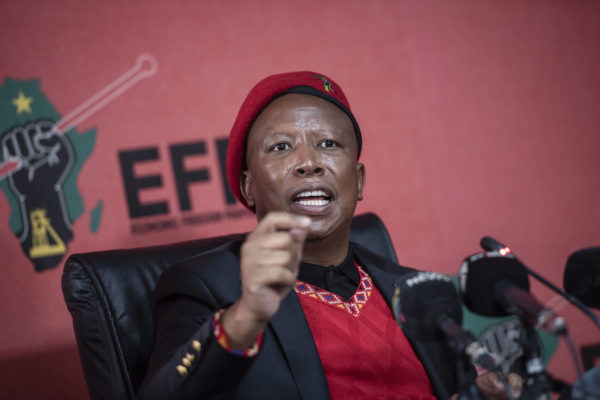 Briefing the media on Tuesday, Malema said the EFF’s negotiation team met with various parties and many “smaller organisations” – including ANC, the Inkatha Freedom Party (IFP) and ActionSA.

“The negotiations team held two official meetings with ActionSA. While there was a degree of mutual understanding and to some extent agreements with ActionSA on the approach to municipalities, which they represented in, we learned via media that ActionSA will not work with the EFF in the manner in which we had proposed.

“We respect ActionSA’s decision and hoped that their decision is autonomous from external influences,” he said.

He, however, insisted that the EFF had not closed the door on ActionSA.

On Saturday, ActionSA leader Herman Mashaba confirmed that his party’s senate had rejected EFF’s coalition proposal, but it did not specify on the details.

The EFF leader said the Red Berets had reached agreements with the IFP on a number of municipalities in KwaZulu-Natal (KZN).

“[We] established sufficient consensus to collaborate in many hung municipalities in KwaZulu-Natal. The details of the agreement with the IFP will be published after their special national council meeting which is taking place today.”

Malema pointed out that the EFF had reached an agreement with the MAP-16 Civic Movement in the Free State.

However, the ANC would be shut out of the municipalities in the region.

On negotiations with the ANC, Malema said the party’s war council had decided to terminate coalitions talks with the governing party.

He explained that the ANC had sought to rush into discussions over positions and power sharing, before discussing the principles and policies raised by the EFF.

“Based on this report, [the] war council resolved to stop coalition discussions and negotiations with the ANC because they are failing to provide clear commitments and timelines on the key issues raised as a basis for negotiations.

“The ANC was unable to give clear commitments on the issues we have raised. This is despite the EFF’s negotiations team giving the ANC an opportunity to present alternate timelines and deadlines on all these important policy questions,” he continued to say.

READ MORE: EFF remains only hope for ANC as IFP shuns it

Malema also said the EFF would not vote nor support ANC candidates in all municipalities.

This is for all positions, including positions of speakers, chief whips and mayors.

He added that the EFF would also not vote for political parties that did not approach the party for coalition discussions.

“In municipalities where there is sufficient consensus and possibility to win, the EFF will field candidates for positions in the municipalities, and in each instance, we will publish the basis, principles and policies of such collaborations,” he said.

Malema assured that the EFF would not walk out of future municipal council sittings, in an effort to avoid instability and conditions that might lead to the dissolution of municipalities.

The party’s councillors have previously walked out of several council meetings in the City of Tshwane following the collapse of a coalition with the Democratic Alliance (DA).

This led to the metropolitan municipality being placed under administration.

The decision was later overturned by the Pretoria High Court in April 2020.

The Constitutional Court (ConCourt) further ruled last month that the Gauteng provincial government’s decision to place the city under administration was unlawful.

Among conditions for a coalition, the EFF has demanded being handed a municipality to govern – in exchange for helping any party to get into power – and appointing its own EFF cadres.

The EFF has also demanded the amendment of the Constitution within six months to allow for expropriation of land without compensation and the creation of a state bank, as well as cancellation of student debt within a year.

The party also wants Die Stem to be removed from the national anthem within 12 months.