Three members of the Oppenheimer family donated R3.3 million each to ActionSA in the second quarter of 2021.

The ANC’s cash flow problems appear to have improved, albeit via a murky donation from the ANC’s own Investment company Chancellor House.

The ANC had previously complained that they had experienced trouble raising funds, as donors were hesitant having their names linked to specific political parties.

Having their own investment company, which the party set up in 2003 as a funding vehicle, seems to be a convenient way to bypass this hesitance, as can be seen in the latest IEC political party funding report.

According to the Independent Electoral Commission (IEC), the governing party declared R22,619,969 in funding for the second quarter of 2021.

The Economic Freedom Fighters were among 502 political parties that did not disclose any donations.

The Political Party Funding Act requires donations of R100,000 and upwards to be disclosed by parties and donors to the IEC.

This time, President Cyril Ramaphosa donated a total of R366,000 in two instalments to the ANC. 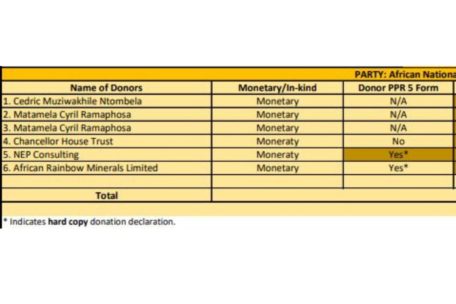 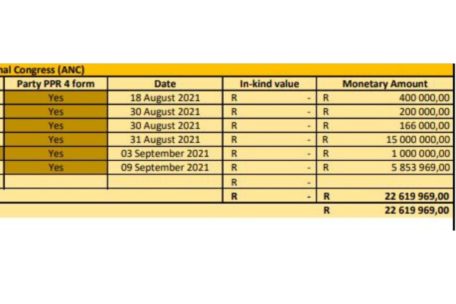 The DA’s biggest donor this time around was Durban philanthropist Martin Moshal, who donated a whopping R15 million to the party, the maximum amount allowed per year, by law. Last quarter, he was responsible for ActionSA’s biggest donation of R2.5 million.

Moshal co-founded Entrée Capital and has been described by Crunchbase as a “prolific innovator and entrepreneur”. He also established the Moshal Scholarship Program, which supports more than 900 financially disadvantaged university students in Israel, South Africa and Ukraine.

Donations from foreign entities or people like Davis cannot be more than R5 million in a year. 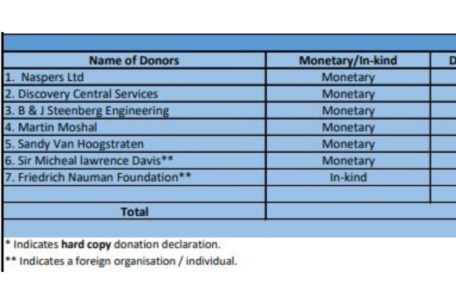 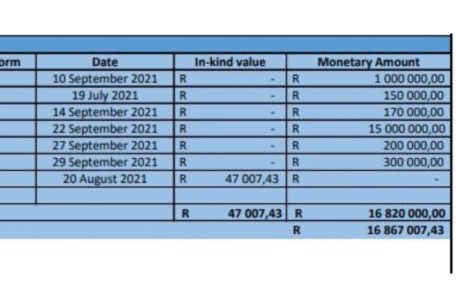 Moshal tops the list as ActionSA’s biggest funder with a donation of R5 million.

Three members of the Oppenheimer family donated R3.3 million each.

Rebecca Oppenheimer, Victoria Freudenheim, and Jessica Slack, who are the granddaughters of Harry and Bridget Oppenheimer and daughters of Mary Slack, donated a total of nearly R10 million to the new political kid on the block.

Herman Masahba’s wife Connie, is listed as a director of AEEI.

That donation was matched by Salt Rock-based company Moxitone Investments.

Durban-based clothing company, Style Eyes of California, made two donations – a cash amount of R 200,000 and an in-kind donation of golf shirts to the value of nearly R24,000. 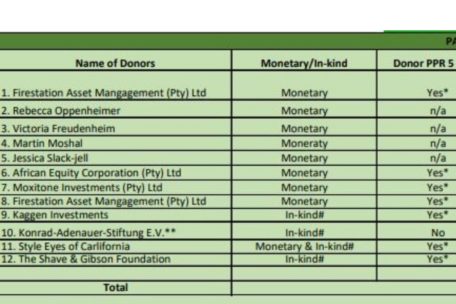 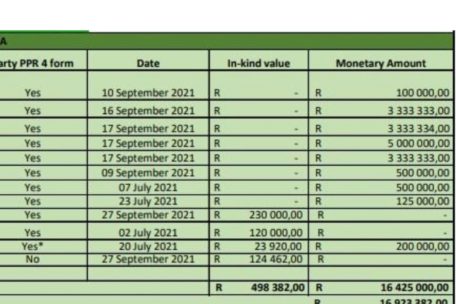 “It is important to highlight that the amount of R112,386.04 declared by AIM was for donations received by the party during the first quarter, i.e. between the months of 2 April and June 2021,” said the IEC.

But AIM only declared the donations to the IEC in the second quarter.

Party funding prescripts state that donations received by political parties must be disclosed on a quarterly basis.

Four political parties have disclosed a total of R780,675.47 in in-kind donations. The disclosures were as follows:

The in-kind donations for ActionSA included items such as donations of 400 corporate golf shirts, consulting services, policy development, provision of books and other marketing material and 950,000 (A5) handout brochures for the party.

GOOD party’s in-kind donation, which was also the only donation declared by the party, consisted of the purchase of a Mazda Drifter BT-50 bakkie.

The in-kind donation for the DA included a service provider payment for party member training which took place between 17–23 June 2021.

This article was originally on 18 November.

ANC North West to discipline councillors who voted for EFF mayor, speaker
9 hours ago
9 hours ago

Will the SABC hit back at the ANC after Mbalula's ramblings?
1 day ago
1 day ago
PREMIUM!

ANC North West to discipline councillors who voted for EFF mayor, speaker
9 hours ago
9 hours ago

Will the SABC hit back at the ANC after Mbalula's ramblings?
1 day ago
1 day ago
PREMIUM!