Residents accuse their ward councillor of failing them as they protest a lack of service delivery. Protest action has erupted in Turffontein with locals taking to the streets to block roads with burning tires. Police have fired rubber bullets and teargas in an attempt to disperse the erratic locals camped on main roads with placards and burning tires.

Locals demand DA ward councillor Rashieda Landis step down as councillor for the area due to the lack of service delivery in the area.

Resident Maggie Cook said Bella Vista locals had a lot of grievances. Flats were rotting due to constant running water. The flats were dilapidated and locals were not benefitting from the ongoing developments in the area, Cook said.

Cook said Landis had not taken their many grievances to heart and would often instruct the locals to write a memorandum of demands for her to process.

The Southern Courier reports that Bella Vista residents want access to the newly developed flats in the area. 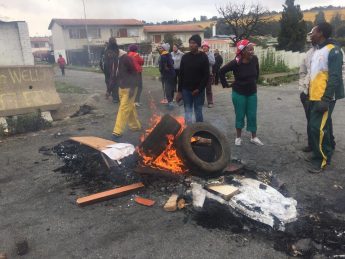 Landis, addressing locals screaming “Rashieda must fall”, said she would address their demands when they were put in a memorandum. She urged the locals to submit their requests and she would forward it to Johannesburg mayor Herman Mashaba.

She said she would organise a meeting with Mashaba where the locals could table their grievances to the mayor themselves. A disgruntled audience told Landis that she was the one to mediate between them and the mayor. They continued to highlight that it was now time for her to vacate her role since she failed to address their grievances.

“We need a leader to fight for us.”

Watch video of talks between residents and Landis below.

(Video taken by the Southern Courier)