The bikers handed over a memorandum at MYNE Maatjies after videos of alleged child abuse surfaced last week. David Kolm of Bikers Against Bullies SA reading a memorandum during their protest outside MYNE Maatjies.

Bikers Against Bullies SA kept their promise and held a protest ride to MYNE Maatjies Day Care on Monday morning after videos of alleged child abuse at the day care surfaced on Thursday, reports the Randfontein Herald.

Bees Fourie, national leader of Bikers Against Bullies SA, said the children who were abused were underage and therefore needed a voice. During the protest, a memorandum was handed over to the Randfontein police calling for the day care to be shut down permanently.

“We demand that an investigation is launched in terms of Randfontein’s by-laws and that the crèche should remain closed because it has not been registered. Action needs to be taken against the people in the video doing the rounds.”

“It is not only about four or five children – we have received complaints from other people whose children had been assaulted at this school. The police need to investigate all those complaints and charge those who are guilty.”

He added if the evidence pointed to more suspects, more arrests would be made.

“They will also be charged and taken to court, but at the moment, we are making efforts to obtain as much evidence as we can, so that we secure a conviction in this matter,” Manamela said. Bikers arrived in numbers to condemn the alleged child abuse at MYNE Maatjies.

Watch the video below in Afrikaans: 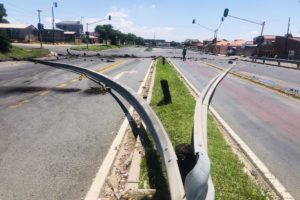 Diepkloof protest update: N1 reopened after residents lash out at Eskom
1 day ago
1 day ago

Diepkloof protest update: N1 reopened after residents lash out at Eskom
1 day ago
1 day ago