Was march to free Kanya Cekeshe a front for EFF power struggle?

A number of activists and EFF members pulled out of Friday's event at the last minute, amid claims the activist's name was being used to fight the party's battles. 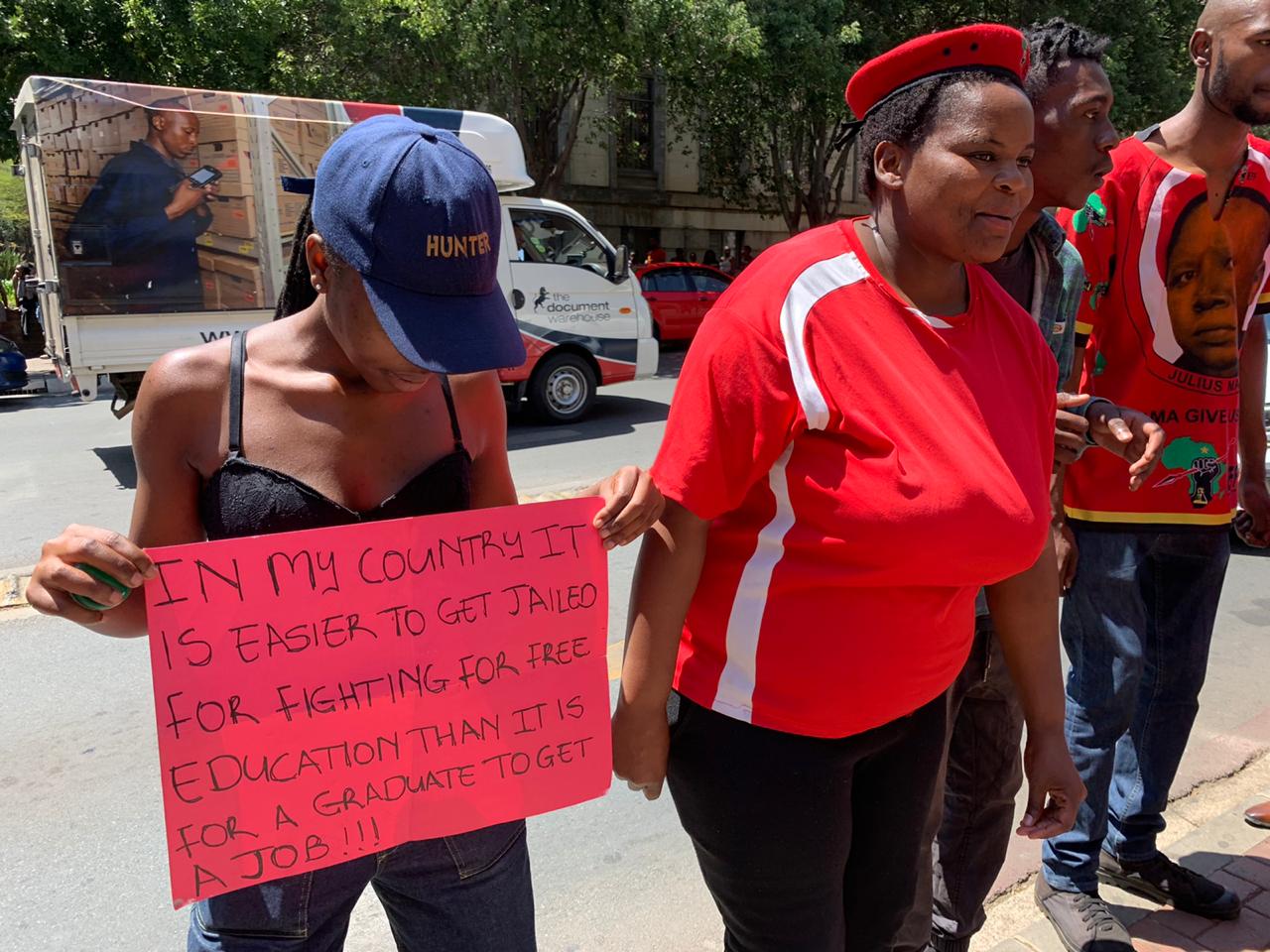 The organisers of a recent march to highlight the plight of student activist Kanya Cekeshe have denied claims they were using his name to fight EFF battles.

This ahead of the party’s second National People’s Assembly (NPA) set to take place next week.

Cekeshe was sentenced to five years behind bars in 2017 for public violence and malicious damage to property after he admitted to setting a police vehicle on fire during a #FeesMustFall protest.

The student protests, which swept the country, were to demand free higher education, the decolonisation of the curriculum and an end to the financial exclusion at South Africa’s tertiary institutions.

Cekeshe is serving his sentence at Leeuwkop prison. His health has also deteriorated in recent months following his failed bid to appeal his sentence.

A number of activists and EFF members pulled out of Friday’s event at the last minute, saying they were duped into believing it was a legitimate event focused on efforts to get Cekeshe out of prison.

Others took to social media to express their disdain.

Former PAC political prisoner Kenny Motsamai, now an EFF member and representative in the National Council of Provinces, distanced himself from the event.

It seems Motsamai participated in the event but claims he had no idea it was factionalised.

In a video, he can be seen holding a red T-shirt with the word “Kokota” (knocking) printed on the back. He later burns the T-shirt as he explains he was “hijacked” by those involved in the event.

“Those people they gave me this T-shirt. I didn’t know that this is something that is not allowed,” said Motsamai.

He apologised to the EFF’s leadership and party members, explaining provincial leaders had issued no communication about the event. Motsamai, explaining why he was burning the T-shirt, said he was doing so in order to show “the boys” he was not one of them.

“This is not part of the EFF programme, they are just doing their own thing. I was not sure that these boys wanted to do something that is not right,” said Motsamai.

“They cannot simply bring factions to the organisation,” he continued.

Two lobby groups, amatorokisi and amapiano, have emerged in the lead up to the party’s NPA. The factions are named after a popular electronic music genre and a local song, respectively.

Amatorokisi have been linked to Malema and is expected to back those he prefers to see in his top six over the next five years, while the amapiano faction has been demanding that Dali Mpofu, the outgoing chairperson, be re-elected to serve another term.

Lobbying has intensified over recent weeks, with social media becoming a platform to sway party members in support of each respective group.

The term “kokota”, which features in the amapiano song, has been largely linked to a bid to ensure Mpofu returns to the top six, while the likes of Academic and Professionals Association secretary-general Boitumelo “BB” Senokoane and former North West party chairperson Betty Diale are installed as new leaders.

One of the organisers of the march, Eva Tembu, told News24 she was “disappointed” by Motsamai’s video.

“Him turning the march into factional battles is barbaric and foolish,” said Tembu.

Tembu insisted it was a non-partisan event and said while there were a few hiccups, they managed to deliver memos demanding Cekeshe’s freedom to both the Department of Justice and Correctional Services as well as The Presidency on Friday.

“I don’t know why they are saying our march was factional. I am not part of any of the NPA factions, even some organisers are not members of the EFF,” she said.

Tembu said while she was a party member, she was not participating in the upcoming conference.

“I thought the faction was called amapiano and not kokota. [We used] kokota because you are knocking on doors that can help us getting Kanya released,” she explained.

Tembu also asked why people were linking their event to EFF politics.

The T-shirt, which shows an image of a person throwing a stone, has upset some EFF members who see it as a sign as backing Senokoane who the amapiano faction wants to see contesting the secretary-general position in the party.

Senokoane has been referred to by some as the “commander-in-chief of the stone throwers” after some party members threw stones at an EFF Tshwane elective conference last year. But Tembu insists the image has nothing to do with amapiano’s slates.

“In the loxion [township] people knock on doors and when they don’t get responses, they tend to throw stones on the roofs, it’s another way of knocking,” claimed Tembu.

She said the T-shirts were not even meant to be red, which is the dominant colour of the EFF.

Tembu claimed the service provider ran out of black shirts and red represented the blood of students who had died during the registration periods at the start of an academic year.

Some senior party members who “intentionally” stayed away from the event said they felt former party members Abednego “Msholozi” Mathole and Tshepo Goba were being opportunistic.

Motsamai named Msholozi as one of those who had hijacked the event and duped him.

“Phanzi ngabo Msholozi, Phanzi nga all those boys that are just want to bring me into this thing. I am not one of them,” Motsamai can be heard saying at the end of the video.

Mathole, who continues to insist he is a member of the party after being denounced by various party leaders and told he had been expelled from the party, told News24 he went to the Union Buildings after most people had left.

He admitted Goba, who was also kicked out of the party, led the march.

“It’s just unfortunate that someone like Kenny can do that, it just shows how people are being bullied [in the organisation],” claimed Mathole.

He said the T-shirt Motsamai burned had nothing to do with the red berets.

“Some of us are now questioning ourselves about his arrest during apartheid,” said Mathole, suddenly questioning the political prisoner’s credentials.

Motsamai spent close to 28 years behind bars for the killing of a traffic officer during a bank robbery in 1989 while serving as a commander of the PAC’s armed wing, the Azanian People’s Liberation Army (Apla).

At the time, Apla said the robbery was to raise funds to finance its efforts in the struggle against apartheid.

“The question we are asking ourselves as young people, is Kenny a revolutionary or just a thug? Sometimes we call thugs comrades,” said Msholozi.

Motsamai refused to speak about the matter, directing News24 to his party leadership and national spokesperson Mbuyiseni Ndlozi.

Ndlozi had not responded to requests for comment at the time of publishing.