Residents say that Eskom is ‘unavailable’ to engage with them, and fails to repair broken transformers. 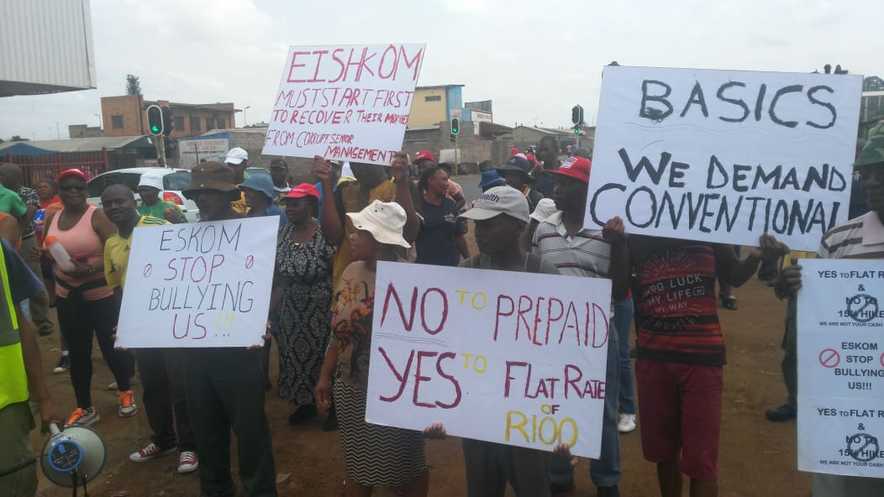 Soweto residents are carrying out a planned a two-day shutdown protest due to power cuts, Eskom’s unavailability to engage with the community, and the flat rate proposal, reports Soweto Urban.

Residents from Soweto, Alexandra, Tembisa, Eldorado Park and the Vaal are expected to participate in the shutdown.

“Officers will be deployed and we will work with other law enforcement agencies,” said Johannesburg Metro Police Department spokesperson Wayne Minnaar.

“We will deal with it as it unfolds.”

The other agencies include the police as well as the provincial and national traffic police.

Soweto Shutdown protest leader Dr Trevor Ngwane say all they want is to have a meeting with Eskom to come up with a solution for their electricity crisis.

A handful of Soweto residents turned up to protest against electricity blackouts and billing problems in the area.

Residents marched up and down the Chris Hani Road, allowing traffic to flow easily. Police and other law enforcement agencies kept an eye on the peaceful protesters.

The leader of the Soweto Shutdown, Rufus Tshoke, said they were expecting more people to turn up later to strengthen their protest.

“The reaction so far is positive. We are having a protest now and have not yet begun blocking roads.

“Today, we are having a peaceful one and at the end of the day, we want to be heard, noticed and get the attention of the powers that be, including Eskom,” said Tshoke.

He added protesters wanted the attention of Gauteng Premier David Makhura, who should acknowledge their challenges with Eskom. He added that protesters have been on the road since 3am.

“We are having people who are using prepaid meters who don’t have electricity. Regarding the R18 billion Eskom bill, Eskom has actually said the actual debt is R5 billion and R8 billion is interest to that debt.

“Eskom must come and tell us how much business and residents owe them and how much government buildings in Soweto also owe Eskom and we can take it from there.

“Even the billing system itself, estimates are being used and we hardly see people checking Eskom meters. Apparently, they use estimates for three months to bill us,” said Tshoke.

The Soweto Electricity Crisis Committee earlier said that it was planning to shut down the township during the State of the Province Address by Makhura and the national Budget Speech this week, EWN reported.

Soweto residents owe Eskom almost R18 billion in utility fees that form part of a culture of non-payment that goes back to the days of apartheid.

Older residents partly blame the ANC for the debt because the governing party’s leaders encouraged them not to pay municipal bills in order to bring the apartheid government to its knees.

Organisers of the Soweto shutdown are calling on residents to abstain from work and take to the streets, wearing black clothing.

VIDEO: Morning traffic flowing as normal on Chris Hani Road in Moroka. About 20 people are walking around the township mobilizing residents to support the planned #SowetoShutdown. Police are in the area monitoring the situation. More details on @POWER987News bulletins. BN. pic.twitter.com/qc4soQRPmu

According to Dr Ngwane, protesters will be demonstrating for affordable electricity, against the unfair rolling blackouts in areas like Soweto that owe Eskom money, and power failures due to maintenance.

He made an example stating that when a transformer is damaged, Eskom neglects to repair it.

“To accommodate the poorest of the poorer we should have what we call a lifeline tariff, where everyone rich or poor gets a minimum amount of electricity the same way as it is happening with water, and they can only start paying as per usage after that,” said Dr Ngwane.

At present, 20 routes are operating normally, with the exception of the F4 route.

The affected route was earlier being diverted to terminate and start at Orlando Stadium instead. It has now been cleared, and is loading and offloading at Boomtown Station.

⚠️UPDATE : 20 routes are operating normally except the F4 route amid this #SowetoShutdown movement. F4 is diverted to terminate and start at Orlando Stadium, we'll update if there's any changes.

If you come across anything please tag @ReaVayaBus on your tweets. ^TM pic.twitter.com/IHA15VFxdB

Police spokesperson Kay Makhubela said police are on high alert and will be monitoring the situation.