According to DA councillor Philip Minnaar, protesters have also blocked roads leading to some of the mines in the area. 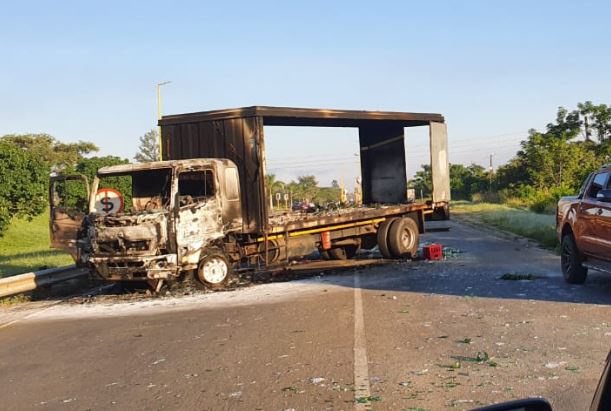 A truck that was burnt out during a protest outside Barberton, 26 February 2020. Picture: Twitter / @WernerBarnard66

The Mpumalanga town of Barberton and the adjacent suburb of Emjindini remain on lockdown following four weeks of violent protests.

Residents embarked on the protests over a massive water shortage in the town, which has been hit by drought. The level of the town’s main water source, the Lomati Dam, was 15%.

Despite numerous meetings between angry residents and Sibusiso Mathonsi, mayor of the Mbombela Municipality, which manages Barberton, the protests have continued.

Initially, only the town’s entrance from Emjindini townhip was barricaded during protests but over the past two weeks residents have embarked on violent protests in the central business district and the industrial area.

This lead to shops shutting its doors to protect staff. Schools, nursery schools and crèches were also forced to close.

According to DA councillor Philip Minnaar, protesters have also blocked roads leading to some of the mines in the area.

Mandla Mamba, a former ANC councillor in Ward 45 in Emjindini, was one of the leaders of the protest action. His party earlier sacked him as a councillor.

Mamba could not be reached for comment. In several posts on Facebook he, however, called on residents to continue with their protest.

Police spokesperson Brigadier Leonard Hlathi said a unit of the Public Order Police (POP) has been deployed to the town and was on 24-hour standby.

He was unable to confirm an apparent shooting incident in the industrial area on Wednesday when a businessman allegedly fired shots at protesters in an effort to protect his business and staff.