'All incoming and outgoing roads are being blocked. The situation is extremely volatile and most businesses are shut,' said uThukela District DA councillor Khulekani Msibi. 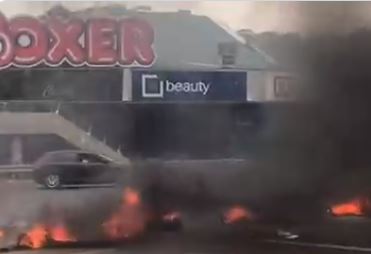 Main roads are blocked by protesters in Ladysmith, which has been in lockdown for 24 hours, 27 February 2020. Screengrab from Twitter video, @SiphamandlaGoge

Major protests have brought the normally quiet KwaZulu-Natal town of Ladysmith to a standstill for over 24 hours.

Residents have lashed out at Alfred Duma Municipality Mayor Vincent Madlala, asking him to step down. They say that service delivery has been hampered for too long and that he has used public coffers to enrich himself.

After numerous attempts to get comment, municipal spokesperson Siya Maphalala did not respond to News24 throughout Thursday.

THESE PEOPLE don’t want to work!

Riot, burning and blocking roads is what they consider as a daily routine in South Africa!????????????

“We ask community members to avoid travel even in and around the CBD area and even in the suburbs. Acaciaville is blocked as well as most of the roads in the locations.”

#Ladysmithshutdown Entry & exit points are closed in Ladysmith as the shutdown continues. Protesters want Mayor Vincent Madlala gone. They are complaining about lack of basic services and ongoing taxi violence in the area. #eNCA pic.twitter.com/eoV2vPcIfG

He said some roads were being cleared.

“However, it is still volatile. We have been told the protest is regarding service delivery and the people asking the mayor to step down.”

Warasally said there were two previous shutdowns in the town and memorandums were handed to municipal officials.

“Yesterday they handed a third memorandum over. Thereafter, they started blocking roads. Police and Ladysmith public safety officers cleared them out last night. It is still quite volatile.”

Police spokesperson Colonel Thembeka Mbele said: “All major routes leading into and out of the town have been blockaded. A community hall in Ezakheni was set alight by unknown suspects and a truck was burnt yesterday morning in Colenso.”

She said cases of public violence and malicious damage to property were opened for investigation.

“There were no injuries reported and no arrests made thus far. Public Order Police are at the scene to monitor and stabilise the situation.”

“All incoming and outgoing roads are being blocked. More and more people are joining the protests, with tyres being burnt in roads such as Protea Drive and Centenary Road. The situation is extremely volatile and most businesses are shut.”

He said reports indicated workers in the water sector were threatening to stop work.