The Western Cape traffic department confirmed the second truck torching later in the afternoon - a construction truck working on a highway project. 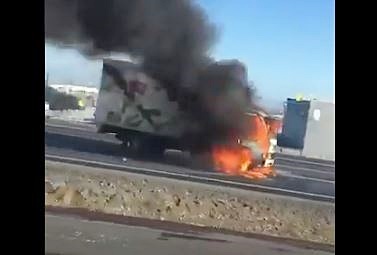 Two trucks were torched on the N7 next to the Covid-19 hotspot of Du Noon on Monday as some residents of the Cape Town suburb demand the more spaced out housing they were promised in 2016.

The first truck was torched in the morning.

“This office can confirm that a truck was burned this morning on the N7, the driver was not injured,” police spokesperson Captain FC van Wyk said.

“A case of public violence was registered for investigation, no arrest has been made.”

The Western Cape traffic department confirmed the second truck torching later in the afternoon – a construction truck working on a highway project.

It was not clear who was responsible for the vehicle torched on the N7.

A group of marchers had blocked Potsdam Road with rocks, filled blue council rubbish bags, and burning tyres. The police and the army monitored the situation.

“Everyone is supposed to be social distancing, but we have nowhere,” said Amoz Kanzi from Site 5, a vast shack settlement that is separated from Du Noon by Potsdam Road.

Another community representative and church leader, Pindile Mazula, said they have to share toilets – and having to fetch water means they simply struggle to keep up with all the Covid-19 hand washing and sanitisation protocols.

“When you go to the toilet, there is somebody in front of you, and somebody behind you,” he said of the long queues for communal toilets, and how difficult it was to avoid communal ablutions.

He said bucket toilets were also used in abundance, which made it even more difficult to keep good hygiene in and around the house.

Kanzi and Mazula said that the most pressing issue was the Upgrading and Informal Settlement Programme (UISP).

They said the government had bought a site near the railway line that moves goods around the nearby industrial area. It was meant to take people from Site 5 in a de-densification project – to make Site 5 less cramped.

However, the land was quickly snapped up by “outsiders”, who had built so many shacks that the goods carts battle to move through, and Site 5 residents have nowhere to move to now, they claim.

On 16 June, ANC ward 104 councillor Lubabalo Makeleni’s office was burnt down. Over the past months, passing the N7 has been perilous for truck drivers on the Cape to Namibia route, many of whom have had to flee their burning vehicles.

A bus was also torched at the weekend.

Du Noon was established to relocate people who had lived in the Marconi Beam area of Cape Town, with some also going to Joe Slovo.

However, due to the immense demand for housing, it has extended to newly occupied surrounds, named Site 5 (or Doornbach as the land was known when still a farm) and Zwelitsha.

It is near the Killarney industrial area, and a veld away from the greater Table View and Parklands area.

Request for comment has also been sent to the City of Cape Town.