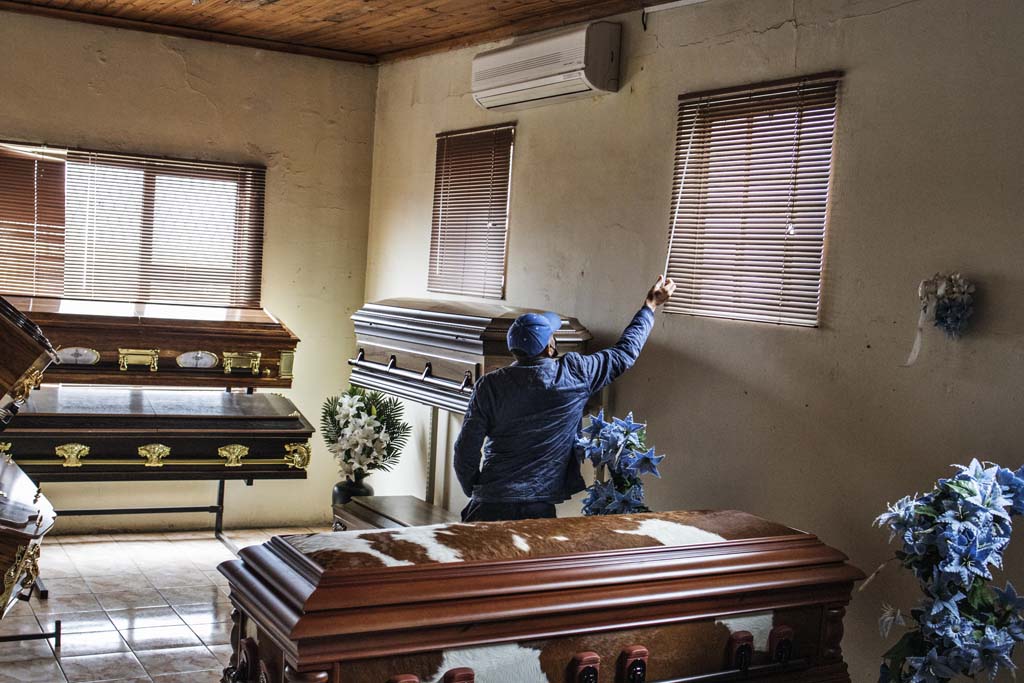 Sello Headbush, the owner of a Funeral Parlour adjusts Venetian blinds, inside the showroom where coffins are on display in Port Elizabeth on July 11, 2020. - "People were not taking this seriously" said the owner of the family run business, as numbers in South Africa of COVID-19 related deaths soars. Photo by MARCO LONGARI / AFP (This picture is for illustrative purposes only.)

The funeral industry is planning a three-day national shutdown of its services in a bid to get government’s attention over a long list of demands it wants addressed.

The call for the shutdown was led by the Unification Task Team (UTT) – a grouping of 17 funeral associations and forums and was planned to begin on Monday, 14 September until Wednesday, 16 September.

UTT said the South African government had not done enough to ensure the industry was diverse and transformed. It said that since 1994, the industry was still dominated by “white minority capital” and a handful of “black elites”.

“The South African funeral industry is rooted in the alliance between white minority capital and black elites, as a result, the majority black funeral undertakers are discriminated [against], oppressed and marginalised.

“Funeral undertakers are peaceful and respectable business people who contribute billions of rands to the economy of the Republic of South Africa, through an honest living,” the formation said.

The Road Accident Fund, National Consumer Commission and Financial Services Conduct Authority were also included on the list. Some of the issues the industry wanted addressed, included the following:

From the Health Department, the UTT wanted the outsourcing of mortuary facilities to be recognised and legalised, as well as for all funeral directors sharing storage facility on a lease agreement or ownership to each qualify for ownership of the certificate of competence for that particular facility.

From Home Affairs, the UTT wanted annual provincial schedules for the writing of designation number examinations.

It wanted the department to allow funeral undertakers who didn’t own a certificate of competence, to write designation number examinations and for funeral directors to be allowed to appoint a proxy to conduct some of the duties on their behalf.

From the COGTA department, UTT wanted municipality bylaws to be amended to accommodate the building of bulk or cluster or complex storages.

It also wanted government to allocate a Covid-19 Relief Fund for the funeral industry – with immediate effect.

They also said they wanted the tender system to be done away with in the industry.

“We want the tender system to be abolished in the funeral industry, to allow families their constitutional right to appoint their preferred service provider. Where there are no families to choose a service provider, a rotation database should be applied. No tenders at all.”

The UTT also said it wanted government to consult the industry before making any decisions that may affect it.

“We want the government to always consult the funeral industry in any event that seeks to affect the funeral industry directly or indirectly. We can no longer be asked to comment on drafts that have been discussed and commissioned in our absence.”From the Small Business Development Department, it wanted it to channel some of its budget toward the industry in the form of grants that would assist in developing small and emerging funeral undertakers.

“We want government to introduce programmes that seeks to assist struggling funeral undertakers who were previously disadvantaged particularly black-owned funeral undertakers, for them to be able to comply with the requirements. Not shut them down.”

The South African Funeral Practitioners Association (SAFPA) had, however, said it would not be taking part in the national shutdown.

SAFPA’s deputy president Ndabe Ngcobo said the association would not take part in the “destructive” and “inhumane” action.

“We are dealing with lifeless bodies. This approach is too radical for our industry. Not collecting a body even for a day is a disaster; how much more for three days. This is inhumane and destructive,” Ngcobo told News24.

“While it should be noted that SAFPA is part of the UTT and acknowledges the legitimacy of some of the grievances raised by UTT in the communique dated 7 September 2020, SAFPA will, however, not be part of the shutdown.

“We are an organisation that promotes adherence to regulation compliance and we believe there are other avenues that can be explored to address the challenges we face as undertakers in South Africa.”

The plans for the shutdown were as follows:

The total national shutdown would commence at midnight on Monday, 14 September 2020, across the country.

Government spokesperson Phumla Williams was not immediately available for comment. Her comments would be added once received.