KZN was dealt another devastating blow, with the Isipingo market being the latest to be hit by widespread looting and violence. 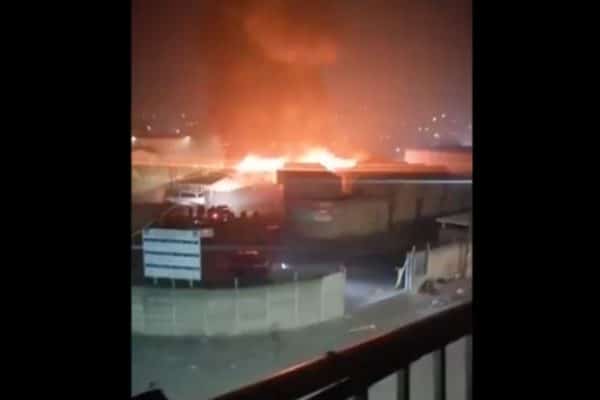 Reports indicate a number of fires broke out on Thursday, and that the Isipingo market is the latest to be hit by widespread looting and violence. Photo: Video screengrab/Twitter/@Abramjee

The unrest plaguing Gutting and KwaZulu-Natal shows no signs of abating in the latter province.

On Thursday night, after many believed the looting and violence had died down, another fire was lit, this time hitting the Isipingo local food market, located just south of Durban.

Reports indicate a number of fires broke out on Thursday in the eThekwini area, and that the market is the latest to be hit by widespread looting and violence.

Several malls and small-scale businesses were hit by violent looters this week.

On Wednesday, the damage stood at over R16 billion, with 40,000 businesses affected and over 129,000 jobs lost in eThekwini alone.

5,000 informal traders and 40,0000 formal businesses were hit, many of which may never recover.

Economists estimated it could take up to two decades for the country to recover from ongoing riots.

Frustrated esidents determined to protect their properties and businesses have set up a number of roadblocks to prevent enterprising looters from gaining access.

Although this has spared a number of malls and shops, allegations of racial profiling have been reported.

On Wednesday night, an off-duty metro police officer was shot and wounded after his car was allegedly targeted by a community roadblock in Montclair, Durban.

ALSO READ: Cele backtracks on racial tensions being cause of Phoenix clashes

Cele initially said on Thursday that racial tensions were the reason behind the deaths, but later made a u-turn, saying the situation cannot only be labeled as racial, and that crime played a pivotal role.

“I refuse to completely take the situation here as a racial situation and pardon criminality,” said Cele.

“For me the domination here would be criminality and yes indeed the racial confrontation may have been there, if there is that element of racism it will be secondary to criminality.”

“We are investigating 14 cases of dead people, and confirmed that bodies are 20 but some people are missing so those bodies might go up.”