Ntshavheni mum on whether Zuma ‘spook’ Thulani Dlomo has been arrested

One of the 12 alleged instigators who helped organise the looting and violence in South Africa this past week is in custody of the police. 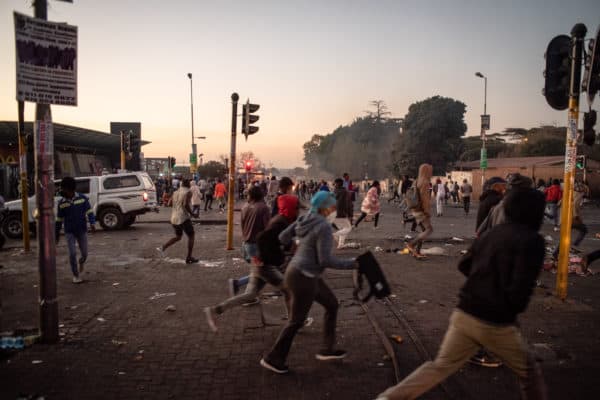 Looters can be seen running from police in Alexandria township during the day's protests and unrest across Gauteng on 12 July 2021. Picture: Jacques Nelles

Acting Minister in the Presidency Khumbudzo Ntshavheni has revealed that one of the 12 people who are believed to be the instigators of the public violence is in police custody.

On Thursday afternoon, Ntshavheni gave an update on the government’s response to the looting and violence that has erupted in the country.

She said the police were now on high alert for the remaining 11 suspects.

“The other question we want to clarify before we deal with the questions of today, which was raised yesterday [Wednesday] equally, is the question around the 12 alleged instigators. We want to report that one is already in custody and the South African Police Service [Saps] tracking team has increased the surveillance of the remaining 11,” the minister said.

Ntshavheni yet again refrained from entertaining reports that former president Jacob Zuma’s ex-bodyguard, Thulani Dlomo, was one of the prime suspects of the “well-orchestrated economic sabotage” .

“I do not know whether Mr Thulani Dlomo is part of the 11 instigators or 12 instigators. The police are investigating and I cannot comment on the specific [details] around one individual. No one can comment because that compromises the investigation.

“It’s not up to us as government or the police to announce who has been arrested… it’s only when people have appeared before the court and been charged that there can be an announcement of the names of those who have been arrested and charged,” she said.

According to News24, it is alleged that Dlomo – who is the former head of a State Security Agency (SSA) special operations unit – is one of the 12 people that are being investigated by the agency for carrying out the “modus operandi”.

Daily Maverick has reported that the 12 instigators used social media in order to carry out their strategic planned attacks.

Screenshots of WhatsApp and Telegram messages – shared on Facebook – appear to show that the organised attacks targeted trucks, highways, and businesses.

TimesLive reported that the “Shutdown eThekwini” WhatsApp group was created only a day after Zuma was admitted to the Estcourt Correctional Centre in KwaZulu-Natal to start serving his 15-month jail sentence.