The investigation had to be cut short when the building was deemed as structurally unsafe. 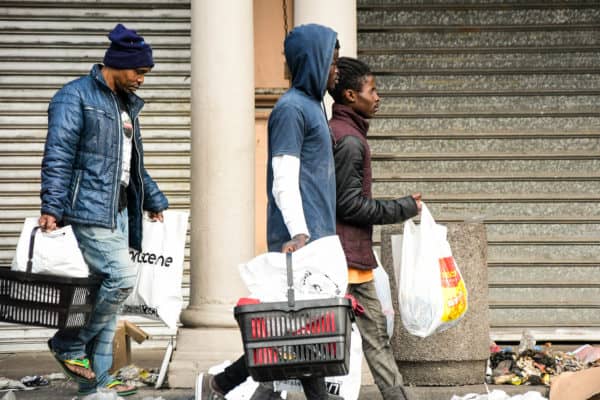 Looters walk home in the Durban CBD during the recent protests in the province. Photo: Gallo Images/Darren Stewart

Three bodies have reportedly been found inside a store that was looted and set alight in the Durban CBD weeks after violent unrest gripped the province.

It is still not clear if there are other bodies in the store as authorities combing the scene had to leave due to the building now being deemed as structurally unsafe.

Police spokesperson Colonel Thembeka Mbhele could not divulge any details attributing that to the fact that it was a sensitive matter.

“I have just come out of the scene right now and we will issue a statement because this is a sensitive issue,” said Mbhele.

It is alleged the store was looted and set alight by looters two weeks ago when KZN and Gauteng were gripped by violent protests.

The South African Police Service (Saps) had revised the number of deaths as a result of unrest that occurred in both provinces to 330 from 337.

“The downward from 258 to 251 as some deaths were previously included were not related to the unrest,” said Ntshavheni.

It is now expected that the number may rise.

Note this is a developing story, this article will be updated as more information becomes available