The road from Ermelo to Piet Retief near Acacia was closed shortly before 7 pm. 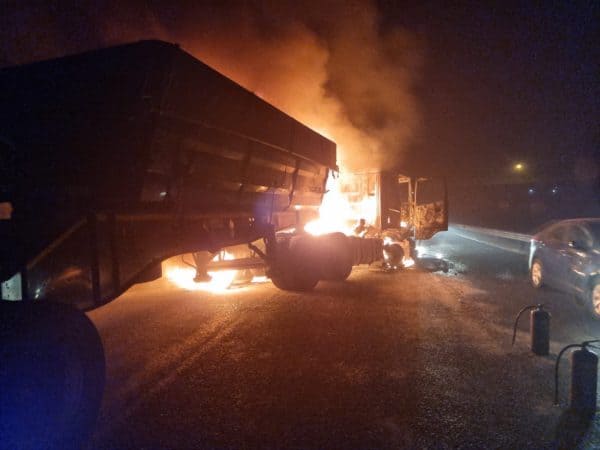 Three trucks – including a Transnet vehicle – and a double cab vehicle were set on alight on Friday evening along the N2 at Ermelo in Mpumalanga.

Posts on social media claim protesters threw rocks as passing vehicles, and motorists have been urged to avoid the area. The reason for the protest was not clear at the time of publishing.

A fourth truck was also damaged but not set alight. The road from Ermelo to Piet Retief near Acacia was closed shortly before 7 pm and police were dispatched to the scene.

Speaking to Ridge Times, spokesman for Ermelo police Captain Carla Prinsloo said the road was opened shortly after 9 pm. She said it was not yet clear how the vehicles were stopped.

Following the protests last month, the agricultural union of KwaZulu-Natal, Kwanalu, called on government to remove or relocate the Mooi River Toll Plaza on the N3

Kwanalu claimed its location places “anyone who moves or services through it at risk”. CEO Sandy La Marque called on government to “acknowledge the risk that exists” at the plaza.

Back in July, Health Minister Kubayi-Ngubane confirmed the deadly unrest in KwaZulu-Natal and Gauteng had resulted in approximately 47,500 vaccines being destroyed due to the looting and violence.

She said 120 private pharmacies were destroyed and the violent protests affected the rollout of government’s inoculation drive. Thankfully, a “large majority of public vaccination sites were not damaged”.