'Inflammatory messages' on various social media platforms seem to not have come to fruition - yet. 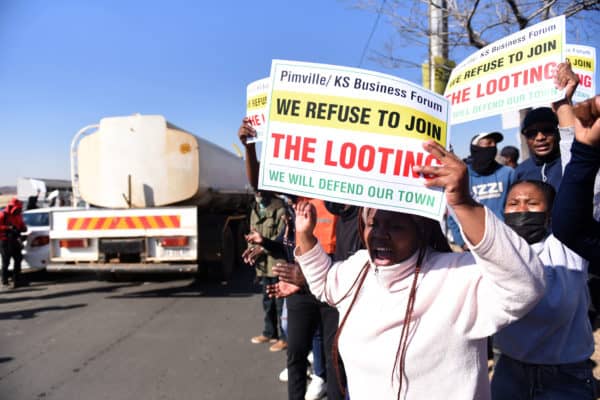 Picture File: Pimville residents protest against looting outside Maponya Mall in Soweto on 14 July 2021. Most businesses have been looted and vandalised. Community members protected the mall overnight. Picture: Nigel Sibanda

With law enforcement agencies on high alert amid threats of a national shutdown, most parts of the country were relatively calm on Monday morning.

This comes after “inflammatory messages” on various social media platforms advocating for violence similar to the deadly civil unrest that gripped parts of KwaZulu-Natal and Gauteng in July.

There were also messages doing the rounds on social media by citizens who are mobilising to respond to the supposed shutdown.

The South African Police Service (Saps) on Sunday said they had put measures in place to ensure the safety and security of South Africans amid the threats of a nationwide shutdown.

“Those behind these messages are warned that inciting violence is a criminal offence. Members of the public are cautioned against spreading such divisive messages,” police spokesperson Major General Mathapelo Peters said in a statement.

Gauteng Police Commissioner Lieutenant General Elias Mawela on Monday morning told eNCA there were no incidents of violence reported in the province except for a few sporadic incidents in some areas linked to service delivery protests.

This despite this, Mawela said police were ready to respond to any threats of violence and looting.

“We know that faceless people say they don’t get tired and we cannot drop our guard and think that everything is hunky-dory. The day is still very young and we will continue to monitor the situation and adapt our plans as the day goes on,” he said.

According to the N3 Toll Concession, there were no reported incidents disrupting the flow of traffic along the N3 highway connecting Gauteng and KwaZulu-Natal.

The Gauteng provincial government on Monday morning assured residents that law enforcement agencies were on high alert to ensure the safety and security of the public.

Premier David Makhura urged the people of Gauteng to abide by the law and report any suspicious activity to the police.

“I call on the people of Gauteng to work with the police and Community Policing Forums to ensure that no acts of violence and criminality see the light of day in our communities.

Updates to follow if any more information on threats of a national shutdown is provided.