‘Too many of us have no jobs’: Operation Dudula take protest to Soweto

People marched through Soweto on Sunday, accusing foreigners of taking their jobs and perpetuating crime. 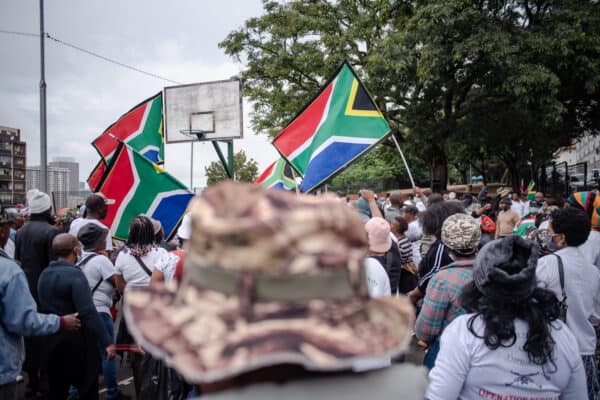 Members of the anti-foreigners movement called "Operation Dudula" gathered at a park in Hillbrow before marching to shops employing foreign nationals that subsequently closed their shops, Johannesburg, on 19 February 2022. Picture: Jacques Nelles

Dozens of people under the banner of Operation Dudula and the #PutSouthAfricansFirst movement took to the streets of Diepkloof Zone 5, Soweto, on Sunday gathering at several crime hotspots, suspected drug dens, illegal occupations and scrapyards seeking to “restore law and order”.

The angry residents marched down the streets of Diepkloof chanting struggle songs and singing anti-foreigner songs, as they amplified calls for undocumented foreign nationals to leave the country. They were monitored by a strong police contingent to ensure that they did not break the law.

Operation Dudula’s national secretary Zandile Dabula said community members urged the organisation to intervene in the many issues that were affecting them, including Bakgomana Primary School. Lessons are no longer taking place at the school as it has turned into an informal settlement.

“There are people who have been illegally occupying that school, they have installed shacks and we need them to leave that place,” Dabula said.

“We also want to make sure that the local scrapyard that is allegedly perpetuating the stealing of cars, selling of drugs and many other illegal things, is either closed down or proves that it is legit.”

Dabula also said they wanted to give Baghdad, another part of Soweto, a warning as the area was known to be rife with drugs and prostitution, and in the informal settlement of Motsoaledi, where many illegal foreigners are allegedly occupying the RDP houses.

A week after their visit to Hillbrow, Johannesburg, to demand that illegal foreign nationals leave South Africa, a large crowd of Operation Dudula members marched in Soweto to warn alleged drug lords and foreigners to vacate the RDP houses in Motsoaledi.

#PutSouthAfricansFirst member Victoria Mamobogo called on shop owners in SA to employ South Africans and make sure that they meet the employment ratio that was implemented by the department of labour. She also said the government should allow foreigners to offer critical skills and not basic skills that South Africans could do.

“We are saying even those who are unemployed should go and face unemployment in their own countries. We need to take stock. Far too many of us young people have no jobs,” said Mamobogo.

“We will not be afraid of foreigners who ran away from their own country and failed to fight for it, to come to our country and become ungovernable. They also need to adhere to our laws and even pay tax.”

When asked why the scarcity of jobs was being blamed on foreign nationals, community member Richard Gaji claimed that foreigners had taken all the jobs for less than minimum wage.

The group has repeatedly claimed that many young South Africans have qualifications but have turned to drugs and alcohol because they cannot find work.