Hlubi-Majola said there were rumours of plans to terminate at least 150 fixed-term contracts. 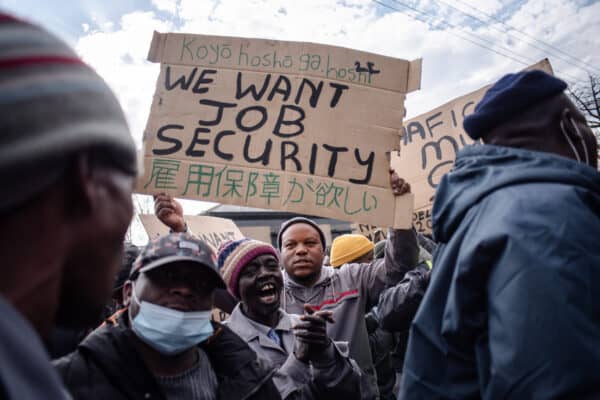 National Union of Metalworkers of South Africa (NUMSA) members picket outside the Embassy of Japan in Pretoria over the future of the Nissan plant in South Africa, 24 June 2022. Picture: Jacques Nelles

Members of the National Union of Metalworkers of South Africa (Numsa) came out in numbers to hand over a memorandum at the Japanese embassy about problems at the Nissan Rosslyn plant.

Dressed in Nissan overalls, they waved flags and placards while chanting voetsek and singing struggle songs as they waited for a representative from the embassy. There was a heavy police presence and private security which formed a human chain in front of the gate to keep the union members in the street.

“Workers want to know what the plans are and whether they will be trained and upskilled to adjust to the new technology.”

Hlubi-Majola said there were rumours of plans to terminate at least 150 fixed-term contracts.

Economist Dawie Roodt said the reality was SA had shocking statistics of unemployment and a rising level of poverty.

“We can learn so much from Nissan. To be honest, people should be lining up to work at Nissan for free to get the skills, experience and knowledge,” he said.

Another blow to the economy was notice of the closing down of Tiger Brands’ canning factory in Ashton in the Western Cape.

“We are deeply concerned about the recent commencement of a consultation period after Tiger Brands gave notice of its intention to close down its canning factory in Ashton Western Cape,” Jordaan said.

The decision would have a devastating impact on more than 4 500 workers in the sector and on the surrounding community.

“Tiger Brands indicated that 250 permanent jobs and 4 300 seasonal jobs are affected at the peak of the season.

“The factory is the life supportof the Ashton community and without it, the community faces socioeconomic disaster. The Langeberg and Ashton factory is also the biggest single source of income for the Langeberg municipality,” he said.

“At a time when job creation and economic growth are desperately needed for the maintenance and recovery of the national economy, the agro-processing sector cannot afford this closure,” Jordaan said.