Agrizzi says he does not have the full names of all journalists who were allegedly on Bosasa's payroll. 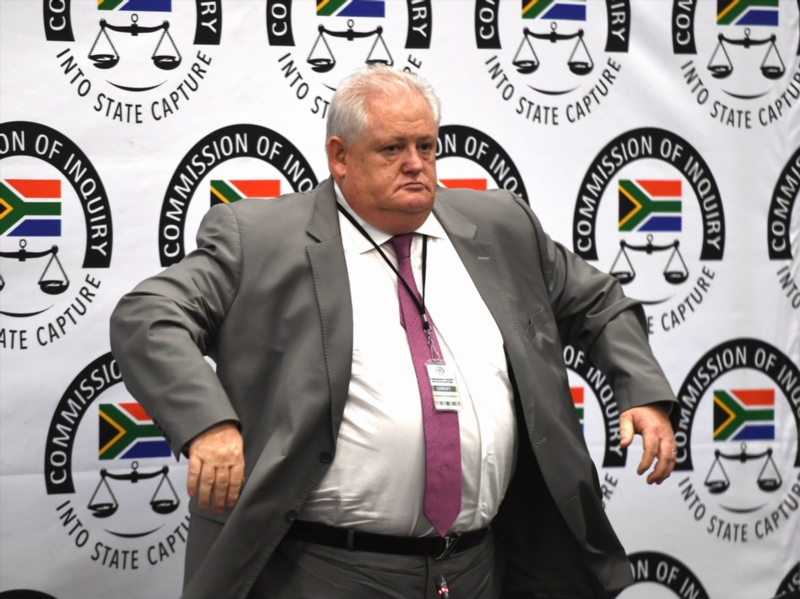 Former Bosasa COO Angelo Agrizzi continues with his testimony at the Raymond Zondo commission of inquiry into state capture on January 23, 2019 in Johannesburg, South Africa. Testifying for the 7th day, Agrizzi claimed that Bosasa had access to confidential documents belonging to the NPA and the Hawks with the aid of Nomgcobo Jiba and Lawrence Mrwebi, who kept officials informed regarding the progress of a corruption investigation into the facilities company. (Photo by Gallo Images / Netwerk24 / Felix Dlangamandla)

Former Bosasa chief operating officer (COO) Angelo Agrizzi has told the commission of inquiry into state capture on Monday that the company paid R30,000 to journalists to write good stories about Bosasa.

Agrizzi said he was approached by the company’s executive director Papa Leshabane, who requested an amount of R71,000, with R30,000 of this amount set aside for paying the journalists.

“I don’t have the full names, except for one or two people,” Agrizzi said, however.

The journalists’ names appear in the black book Agrizzi used to record the money the company officials paid as bribes, which the witness mentioned in evidence during earlier testimony.

Agrizzi said at the time Leshabane made the request, a number of negative reports on Bosasa appeared in the media.

Initially, the only full name he mentioned was Pinky Khoabane. She responded on Twitter that she’d never met Agrizzi and would make a submission to the commission.

I have never met Angelo Agrizzi. I simply reported on his racist rants and his links. I will make a submission to @StateCaptureCom

Leshabane told Agrizzi that he, Leshabane, knew a few people who could write positive articles about Bosasa and give the company’s officials tip-offs on whether there was a negative story on the company that was in production and how such a story could be countered.

He said the payments to the journalists started at around 2012.

The journalists Agrizzi named were “Ntuli”, who worked either for the Times or The Star, Khoabane, who worked closely with Leshabane, and an Eastern Cape based journalist named “Bongs”.

“[Leshabane] was evasive on giving me the full names, the best person to ask would be him,” Agrizzi told the commission.

The company also employed media consultants Benedicta Dube – who at one occasion was “paid well over R1 million for services” –  and Stephen Laufer “on a strategic level. The latter, once a journalist at the Mail & Guardian, is also alleged to have been a KGB spy.

The consultants were employed “to get rid of negative publicity” about the company and discredit the journalists who wrote the negative reports about Bosasa.

Agrizzi said an “in-depth report on various journalists” who wrote these reports was compiled, and included News24 editor Adriaan Bassoon and seasoned journalist Carien Du Plessis and that an attempt was made to link them “to the Stellenbosch crowd”.

If anybody attempted to come up against Bosasa they were threatened, with the company’s officials using the “endless money in the vault” to purchase phones that were not properly registered in terms of legislation and so can easily be destroyed. These phones would be given to Dube “or somebody else” who would then be given the contact details of the targeted journalists who would be called in the late hours of night and day to threaten them and harass them, Agrizzi told the commission.

He recalled being contacted by Ferial Haffajee about threats on Basson.

Agrizzi said on a few occasions he asked Leshabane how come the paid journalists were not writing positive stories about the company and his response was that these journalists were ensuring that there weren’t any negative stories about the company. However, Agrizzi said there were one or two positive ones but could not recall their headlines and topics.

The commission’s head of legal, Advocate Paul Pretorius, said the inquiry’s investigators had instituted a probe into the matter.