WATCH: Concerning transactions and money flow to be detailed at state capture inquiry

A bank official will, in the course of his testimony, track and trace various transactions which were a concern. 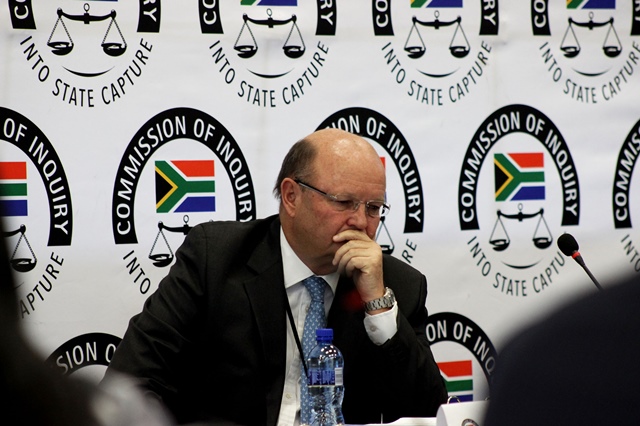 Standard Bank’s retired head of legal, Ian Sinton, who reportedly retired in June 2018, has returned to the state capture commission of inquiry where he is expected to “track and trace various transactions and money flows” which were concerning.

The evidence leader at the commission on Tuesday, advocate Vincent Maleka, said Sinton’s testimony was expected to implicate around 19 persons who have been sent notices.

Adv Maleka says they have issued out 19 notices in relation to Mr Sinton's testimony, he says the number may increase. The commission received responses from Mckinsey and Regiments Capital.#StateCaptureInquiry

However, the commission has only received two responses to the notices issued, namely from McKinsey and Regiments Capital Management.

McKinsey and Regiments have done advisory at Transnet and Eskom.

Last year, Sinton told the commission that Standard Bank took the decision to close the accounts of the Guptas due to media reports.

Standard Bank, Sinton told the commission, kept an eye on media reports about suspicious transactions and a decision was taken to terminate the relationship with the controversial Guptas alleged to be at the centre of state capture.

Sinton cited several media reports about the Gupta family that he said were concerning and caused suspicion for the bank.

These included former deputy minister of finance Mcebisi Jonas alleging that he had been offered a R600 million bribe and the position of finance minister by a Gupta brother and subsequent allegations about the Gupta family made by former ANC MP Vytjie Mentor and former Government Communication and Information System (GCIS) boss Themba Maseko.

Sinton said Standard Bank’s decision to end its relationship with the Gupta family was also influenced by Absa’s decision to terminate with Gupta-linked entities.