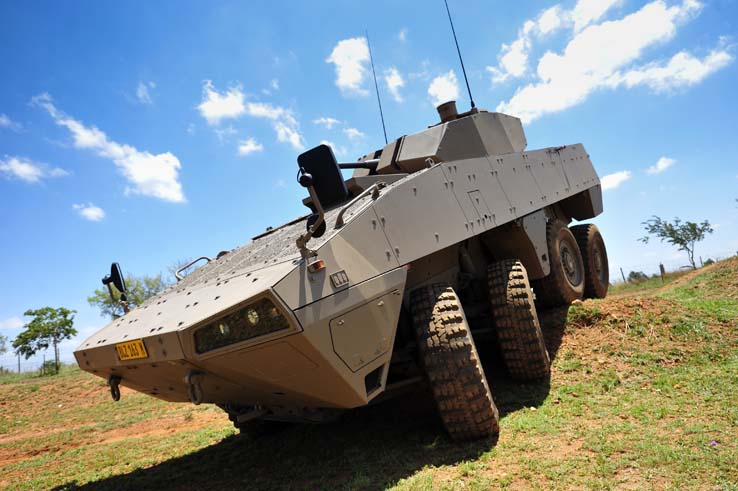 A Badger infantry combat vehicle gives a demonstration of the vehicle's mobility on 19 November at the launch of the Badger at Denel Land Systems in Pretoria. Picture: Christine Vermooten

The Denel Asia deal did not make “commercial sense” for the state-owned arms manufacturer, heard the commission of inquiry into state capture on Tuesday.

In January 2016, Denel announced that it wanted to partner with Asian-based business VR Laser as a vehicle to penetrate the Asia-Pacific markets which had seen year-on-year increases in spending in excess of 20%, making it one of the top spending regions on defence equipment in the world.

VR Laser Asia is linked to the controversial Gupta family alleged to be at the centre of state capture, which the commission is investigating.

Salim Essa, a business associate of the Gupta brothers, is the sole shareholder of VR Laser Asia.

The former chairperson of the Denel board, Martie Janse van Rensburg, said the board she chaired had not considered establishing Denel Asia by the time its term ended in 2015.

Former minister of public enterprises Lynne Brown did not renew the term of the board Janse van Rensburg chaired and opted to appoint one which lacked in skills and qualifications, the commission heard on Monday.

Janse van Rensburg told the commission that the newly appointed board was not given sufficient time to do its “homework” in the establishment of Denel Asia, with ministers being notified about plans to do so by October 2015 when the new board had assumed its functions in July 2015.

She told the commission that there was a lot of “market intelligence homework” which had to be done before establishing such a subsidiary in another country.

“The feasibility of that needs to be evaluated and prepared and considered by the board before the process can go forward, in order to notify the relevant shareholders [and] the departments, in establishing such an entity,” Janse van Rensburg said.

The board that replaced the one chaired by Janse van Rensburg assumed its functions around July 2015, she said, which “was a relatively short period” for it to familiarise itself with the information on the establishment of Denel Asia.

The tons of “homework” needed to be done would result in the board building an “investable case” and “a banking case that makes business sense” before deciding to continue with establishing the subsidiary, Janse van Rensburg said.

The GuptaLeaks emails, a trove of electronic correspondence from the Gupta business empire that was leaked to media, showed how the Guptas acted as middlemen and took a large chunk of the Denel-Asia deal and tried to sell Denel’s intellectual property to India.

The chairperson of the new board appointed in 2015, Gupta-linked Daniel Mantsha, was reportedly wined and dined by the politically connected family and even forwarded his outstanding municipal accounts to Gupta lieutenant Essa.

Brown appointed Mantsha despite that fact he was struck off the roll as an attorney in 2007 and only re-admitted in 2011.

Denel announced in 2017 that it had decided to exit the Asia joint-venture following a focus of negative attention from the media to the detriment of its brand, both locally and internationally.

Janse van Rensburg said on Tuesday that establishing an entity such as Denel Asia would typically require that the joint venture be concluded with a state-owned company and that the government of the country where it would be established would be involved in such a venture.

The government, she explained, would seek to ensure that its country’s local procurement requirements are satisfied.

However, VR Laser is a private company which at the time did not have “a footprint” in Asia and, more specifically, India, said Janse van Rensburg.

“If I look at the publicly available information, the structure of the transaction had two parts and the one was Denel Asia that was created as a holding company and underneath that there were joint ventures.

“And if the transaction was structured in a way that Denel would own 51% of Denel Asia, but that is only a holding company, if you then structure a further company underneath that in the country which you are doing business with … eventually the amount of money that will flow through to Denel would be quite a smaller component,” she told the commission.

Based on publicly available information, Janse van Rensburg said the joint venture did not make any “commercial sense” and that VR Laser stood to benefit more than Denel.

The former shareholder of VR Laser, Benny Jiyane, took the stand at the commission and was expected to share information on how his company ended up being linked to Gupta-owned companies.

Evidence leader Adv Zinhle Buthelezi says the next witness is the former shareholder of VR Laser, Mr Benny Jiyane. He will share information on how his company ended in the links with Gupta owned companies. #StateCaptureInquiry