The witness says the former president had said that Montana's experience, knowledge and skills were needed at the SOE. 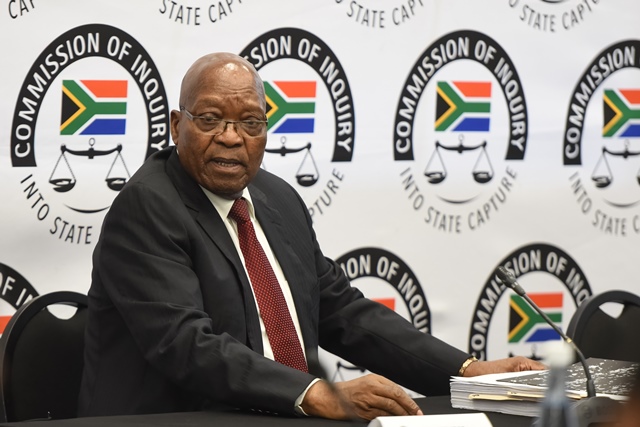 Former chairperson of the Passenger Rail Agency of South Africa (Prasa) Popo Molefe on Friday told the commission of inquiry into state capture that former president Jacob Zuma attempted to get Lucky Montana reinstated as the CEO of the agency following the latter’s resignation from the state-owned enterprise (SOE).

Earlier in the week, Molefe told the commission that it is “a misnomer” to say Montana resigned from the position because his contract was due to end on 31 March 2015 and the former CEO had indicated that he did not want his contract to be extended.

After Montana left the agency, Zuma called Molefe to a meeting where he attempted to persuade the former board chair to reinstate Montana, despite the former Prasa CEO having tendered his resignation to the board, which was accepted, the commission heard.

Molefe told the commission that “shortly after the meeting I had with Mr Montana” – in which the former CEO tabled a “litany of complaints” – he received an invitation from the then minister in the presidency, Jeff Radebe, via a private email, which was “worrisome”, for him to meet with Zuma. This was in April 2015, the commission heard.

Molefe said what was “worrisome” about the invitation being sent via private email was that “the meeting could have easily ended as an informal affair”.

“The email had said that he wants to discuss the affairs of Prasa,” Molefe said, adding that he subsequently received a telephone message for the meeting.

Molefe told the commission that he found it “bizarre” that protocol had been circumvented because the invitation had not come from the minister of transport – Dipuo Peters at the time – to whom he reported to.

However, he said that meeting did not materialise, after waiting “there forever”, and that the former president then rescheduled the meeting and changed the location to Pretoria.

A subsequent meeting was convened months later on 20 August 2015 at the presidential guesthouse in Pretoria.

“The meeting, chairperson, started three hours late,” Molefe said, adding that he met with Zuma in the passage as he was about to leave.

He told the commission that during his wait with Peters, he had been informed that Montana had been seen in the premises coming out of one of the rooms with Roy Moodley and so assumed that they had had discussions with Zuma.

“I was surprised that they would have had the opportunity to meet with the president and [were] given preference over the minister and the chairperson of the board,” Molefe said.

Molefe said before the meeting commenced, Zuma informed them, him, Radebe and Peters, that he had invited Montana to take part.

He said Zuma became “very irate” when he questioned him about the protocol the former president had followed when he convened the said meeting.

Molefe said prior to the August meeting, an association and a union had called for Montana’s return with the former – the Commuter’s Association led by Steven Sangweni – threatening to destabilise the agency if this did not come to fruition.

Around this time, Montana had also made public statements that he was willing to return to Prasa if the minister and the board so wished, however, on condition that Molefe’s board would be dissolved, the commission heard.

Molefe said at some point of the meeting, Zuma said Montana was “very experienced” and “knowledgeable” about the rail sector and that he had “the skills that the country needs and in my view he should not be lost to the country, that some solution should be found to allow him to continue to ply out his skill, to use his skills in this important organisation”, a solution being that the board should rescind its decision to let Montana go.

“My response to the president, chairperson, was that I cannot make a commitment in a private meeting about a matter decided by the [board],” Molefe said, adding that he suggested that Zuma should himself address the board.

Molefe said it became apparent to him that Montana had been “thoroughly briefed” prior to the meeting and that he was given a “lion’s share” to table a “very long report” he had prepared.