He described newly appointed security advisor Dr Sidney Mufamadi as 'a great benefit to us in ensuring state security works well and is professionalised'. 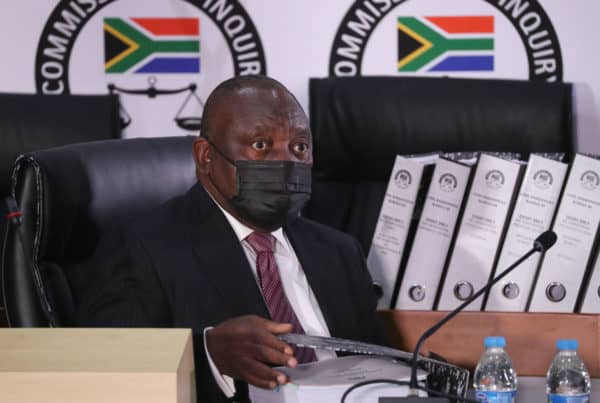 President Cyril Ramaphosa appears on behalf of the ruling party African National Congress (ANC) at the Zondo Commission of Inquiry in Johannesburg, South Africa, 11 August 2021. The Zondo Commission was set up by former President Jacob Zuma to investigate state capture and corruption in the country. Picture: EPA-EFE/SUMAYZ HISHAM

Determined to clean up the vestiges of the state capture project, President Cyril Ramaphosa has given the Commission of Inquiry into State Capture an undertaking to deal with individuals implicated in billions of rands siphoned from state coffers during the Jacob Zuma presidency.

Asked by commission evidence leader Paul Pretorius on whether those implicated in state capture – among them Zuma-era intelligence minister David Mahlobo and director-general Arthur Fraser – would face consequences, Ramaphosa told Acting Chief Justice Raymond Zondo: “Our task now is to deal with all the things that went wrong and the perpetrators.

“The commission will help us cleanse the state and identify those who perpetrated wrong.”

“Our task is to correct and root out the malfeasance and corruption. Having a security advisor will help to realign the agency. The future will be a lot different to what we have been through.”

On the reconfiguration of Cabinet, with intelligence based in the presidency, Ramaphosa said: “I took the decision to bring it into the presidency because it is an asset of our nation and should serve the nation and not certain sections or factional interests.”

He described newly appointed security advisor Dr Sidney Mufamadi as “a great benefit to us in ensuring state security works well and is professionalised”.

In his closing address, Ramaphosa said: “Despite the evidence that has been presented before this commission and the excellent work by many investigators, academics and the truly outstanding journalists in our country, we may never know the true cost to our country of state capture.

“We may be able to establish how much of public funds have been stolen – by how much costs for public goods and services may have been inflated.

“It may be possible to quantify the infrastructure and services that could have been provided to the people of our country with the funds that were stolen and wasted as a result of state capture.

“We could quantify this in hospital beds, commuter trains, houses, social grants, water reticulation, road maintenance and any number of other public goods and services that state capture robbed our people of.

“State capture led to the departure from the public service of highly qualified and experienced people. It is likely it also discouraged many talented young people from joining government, which has significant implications.

“By weakening our security forces and law enforcement agencies, the actions associated with state capture placed the security and integrity of our country at risk.”