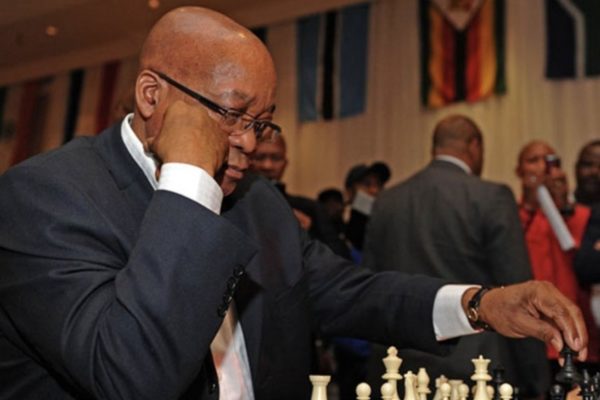 Former president Jacob Zuma was found to have colluded with puppet masters the Guptas in instances of state capture. Photo: Twitter/@JGZ_Foundation

State capture was real. It was not a figment of the imagination of white monopoly capital – controlled media.

That was the message in acting Chief Justice Raymond Zondo’s first instalment of his reports on his Judicial Commission of Inquiry into Allegations of State Capture, Corruption and Fraud in the Public Sector, which was handed to President Cyril Ramaphosa on Tuesday.

State capture was a complex web of individuals and companies working together to systematically syphon taxpayer money away from the state. In many cases, the beneficiaries were the Gupta family, but there were also many others who lined their pockets.

The first part of the Zondo commission report focuses on the milking of SA Airways; the diversion of huge amounts of money to the farcical Gupta media organisation The New Age, and to the efforts to collapse the SA Revenue Service (Sars).

There were three aspects to the plunder.

They then manipulated and abused existing tender and procurement processes within those organisations to steal hundreds of millions, if not billions, of rands through illegal, unnecessary or padded contracts for goods and services.

Next, as a way of not only slowing down any processes of accountability – by neutralising honest employees or officials in targeted organisations – the legal system was deliberately undermined.

The state prosecuting authority was destabilised through constant changes of leadership to compliant bosses prepared to look the other way on bringing charges, and Sars was similarly incapacitated through the closure of vital investigating functions and by attempts to amend oversight on tender processes to allow the theft to continue.

ALSO READ: ‘Ramaphosa must ensure those implicated by Zondo are held to account’ – Amnesty International

Finally, there was the expensive propaganda campaign paid for by the Guptas, aimed at muddying the information waters so much that they, and their patron, former president Jacob Zuma, could escape close scrutiny.

The New Age newspaper and its TV arm, ANN7, was the platform used to push their agenda, as well as to divert money to the family from SOEs.

The Guptas also engaged the services of British public relations firm Bell Pottinger which developed and spun the narratives of white monopoly capital and radical economic transformation … both of which sought to portray any criticism of Zuma or his puppet masters as racist or anti-transformation.

Zuma was a central player, according to Zondo’s reports.

The ANC, as the organisation which “deployed” many of the people who operated the state capture machinery, was also deeply involved