A fellow guest said that the car was swept away by floodwaters after much-needed heavy downpours in Limpopo, but it was later retrieved. The Kruger's low water bridges have been opened to motorists, but tourists are urged to be cautious. Photo: SANParks

Some rivers are still flowing strongly after heavy rains soaked a large area of the Northern part of the Kruger National Park (KNP) on Saturday, reports Letaba Herald.

Despite the flooding which closed roads and camps in the Kruger National Park, KNP spokesperson, Isaac Phaahla, has expressed relief that the heavy rains in the area brought comfort to animals that suffered under the drought which parched the land for the past few months. The Northern part of the park received a high rainfall compared to recent years, with Isaac Phaahla confirming that the KNP recorded approximately 200mm of rain.

“We did get rains in the North but the only affected infrastructure was the Sable Hide which is an overnight facility and it will be closed for some time while assessments are being made. The low water bridges have been opened to motorists, but we still urge tourists to be cautious at low water bridges every time we receive rains,” explained Phaahla. Limpopo has been especially affected as a severe drought continues throughout the country. Dams were almost empty, with hardly enough water to sustain the province.

Residents and visitors to the KNP shared footage clips of the aftermath of the heavy downpours.

Jaco Gericke told the Phalaborwa Herald that he had spent the night at one of the camps prior to its flooding and that the next morning they were trapped due to the heavy rain. 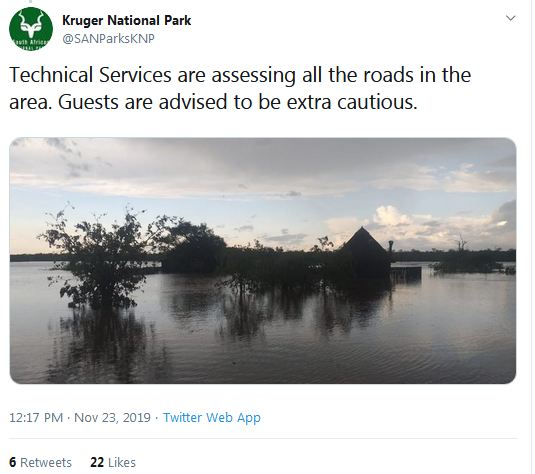 “I slept at Sable Hide in the Kruger National Park last night [Friday, November 22]. Everything went so well until the morning! One of the people with me lost their vehicle when it was taken by the floodwater. Thank heavenly Father we are all safe. We were trapped,” stated the local paramedic.

Fortunately, the group managed to retrieve the car from where the water had left it. Phaahla told the Phalaborwa Herald that the KNP was unaware of any damage or loss of property to their guests.