Flooding in Mamelodi, Centurion due to heavy rain Roads have been closed in Centurion and in some parts of Pretoria on Monday morning due to flooding, reports Centurion Rekord.

He said Lenchen Road at the Centurion lake was also closed.

According to reports, Lyttelton Road in Clubview was also closed due to flooding.

Mabaso also mentioned that the Capital Park low water bridge had also been closed on Monday morning and would be monitored through the course of the day.

He said no serious incidents had been reported yet.

The area around the Centurion hotel and Centurion Lake appeared to be underwater, according to photographs and videos shared on social media. 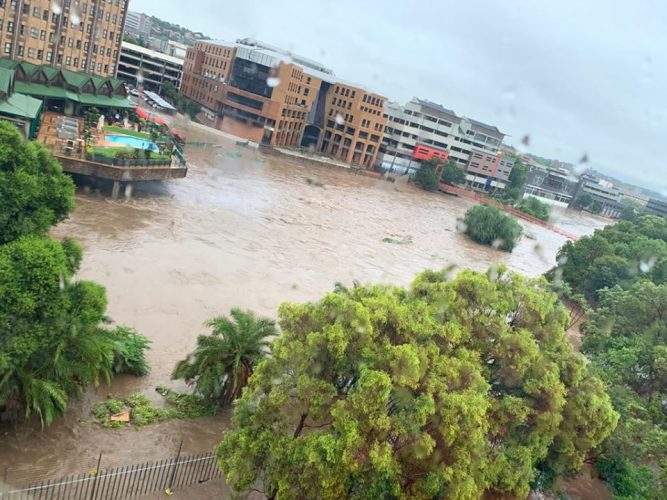 On Monday, an evacuation of guests and staff was under way after the parking lot and reception area at Centurion Lake Hotel became flooded following heavy rainfall in the province last week.

Mabaso earlier told News24 that guests and staff at the hotel were safe and had been moved to the upper floors of the building. He later confirmed an evacuation was under way, although not ordered by the City.

“Our incident commander is locating who ordered the evacuation, but I can confirm it. Our [City EMS] stance is that people inside the hotel are safe because they are on higher ground in the four-story building,” he said.

This was taken from Momentum. This is the lake between Momentum, Centurion Hotel & Centurion Mall. ???? Please be safe guys. ???? pic.twitter.com/YZQnzIlNdv

Motorists were advised to avoid these areas and those affected have had to change routes due to flooded roads and low-water bridges.

Woke up to this Centurion Riverside pic.twitter.com/vE8ma8e0Ab

Videos of the flooding at the so-called informal sorting station next to West Avenue are also circulating on social media.

Reports claimed the homes of the informal recyclers living there had been destroyed.

“The low water bridge at End and Rabie streets have been closed following heavy rain since Sunday afternoon,” said Mabaso.

The City of Tshwane said the roads were not safe to drive in and had pleaded with residents to only drive if necessary or otherwise remain indoors.

“Road users should not attempt to cross low water bridges and any other stream where the water has swelled above normal,” warned Mabaso.

Mabaso said three people from a nearby informal settlement were rescued after they became trapped in the floodwaters.

“In Nellmapius Road, two people were rescued after they were trapped inside their vehicle they were travelling in, while on Jan Smuts [Avenue], three children and two adults were also rescued.”

Gauteng acting MEC for social development Panyaza Lesufi is expected to head to Ward 28 in Mamelodi on Monday afternoon where residents have also been affected by flooding. Hundreds of shacks in the area are covered in water.

Lesufi said he would provide social development support to the affected residents.

Mabaso said rescue teams were also on the scene at the Eerste Fabrieken informal settlement in Mamelodi where residents were standing on their roofs.

Residents will be evacuated to the Mamelodi community hall while the disaster management team works with other stakeholders to find alternative shelter.

In Johannesburg, EMS spokesperson Robert Mulaudzi said there were no major flooded areas where they had to evacuate people, although they were monitoring rivers in Midrand, Alexandra, and Soweto.

“We have not evacuated any people due to the weather conditions at this stage. We are monitoring the situation,” Mulaudzi said.

The South African Weather Service tweeted on Monday that more rain was expected in the province later on Monday afternoon and into the evening.

Please always be vigilant when flooding occurs. Do NOT cross flooded roads. As much as 20cm of water can move your car. (Credit to NWS and NOAA). pic.twitter.com/gEl9uePtRd

ER24 offered the following tips for someone caught in a flood: