Everyone older than 18 can get their Covid vaccines from Friday

The move comes after there had been calls for the vaccine to rolled out to 18-to-34 year olds immediately, rather than waiting until 1 September. 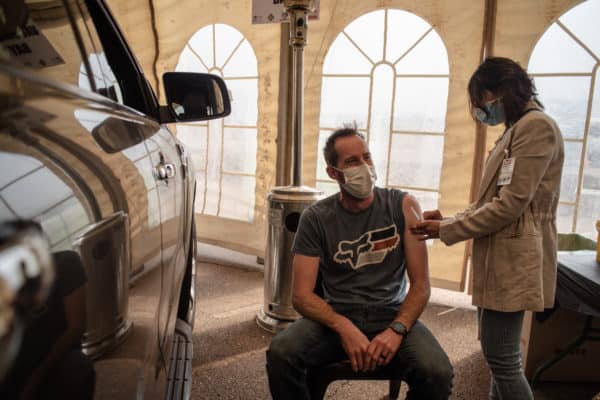 A nurse administers Bjorn Gerbert with a vaccine jab at the first free drive-thru vaccination site set up by the community in partnership with government at the Zwartkops Raceway along the R55 in Centurion, 13 August 2021. Picture: Jacques Nelles

All adults above 18 years old will be able to register to get the Covid-19 vaccine from Friday following approval from Cabinet.

“As part of increasing the vaccination roll-out programme, Cabinet approved the vaccination of persons aged between 18 years and 35 years from 20 August 2021,” the Government Communication and Information System (GCIS) said in a statement on Thursday.

The move comes after there had been calls for the vaccine to rolled out to 18-to-34 year olds immediately, rather than waiting until 1 September.

This is due to the low turnout of people in the past week, despite government opening more vaccination sites across the country for citizens to get either the double-dose Pfizer-BioNTech or the single-dose Johnson & Johnson (J&J) shots.

Business for South Africa (B4SA) announced on Monday that all private-sector vaccination sites across South Africa were now accepting walk-ins from anyone who is eligible to get the Covid-19 vaccine.

“Sites will accept anyone for vaccination who has an ID, passport or other form of identification, regardless of their nationality,” the group said in a statement on Monday.

The sites include independent community pharmacies and corporate pharmacy chains, such as Dis-Chem and Clicks, medical scheme vaccination sites, and private hospitals.

B4SA also confirmed that while sites would prioritise those with scheduled appointments and those over the age of 60, no person above the age of 35 was required to pre-register before visiting a site for a vaccination.

Last week, Minister of Health Dr Joe Phaahla said he was confident about the use of the Sinovac vaccine in the country, following the South African Health Products Regulatory Authority’s (Sahpra’s) approval of the vaccine back in July.

In addition, the minister said the AstraZeneca vaccine – which had shown itself to be effective against the Delta variant – “should be brought back into use”. Phaahla said the goal now was to vaccinate more than one million people every three days.

In July, President Cyril Ramaphosa confirmed that the country would receive around 31 million additional doses from Pfizer and Johnson & Johnson within the next two to three months.

The US government has also donated 5.7 million doses of the Pfizer vaccine to South Africa.

South Africa would be “able to have vaccinated, at least one dose, 35 million people before Christmas”, according to National Health Insurance (NHI) deputy director-general Dr Nicholas Crisp.