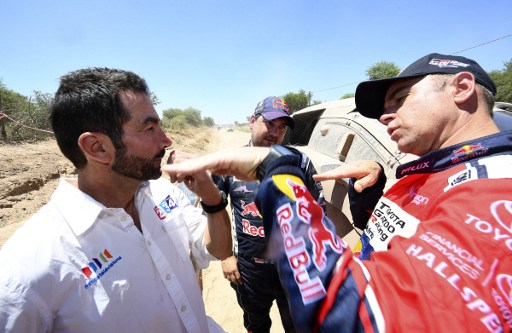 Former champion Giniel de Villiers of South Africa charged back into contention on Thursday, brushing off a number of setbacks to take sixth place on stage four of the Dakar Rally.

The South African driver admitted they had struggled in the soft dunes on the high-altitude leg as the race moved from Argentina to Bolivia.

“Thankfully it had rained in the area recently, otherwise who knows what may have happened,” De Villiers said.

Despite picking up two punctures and experiencing navigation trouble, however, De Villiers climbed to seventh place overall and was 43:59 behind Despres in the car rankings with eight stages remaining.

His Toyota Gazoo Racing SA teammate Nasser Al-Attiyah was forced to withdraw from the event ahead of stage four, after he had established his place among the early leaders, and Spaniard Nani Roma was leading the local outfit in fifth place overall.

In the bike division, David Thomas finished 87th on the stage, retaining his place as the top SA rider in the contest as he settled into 67th position in the rankings.

Stage five, to be held on Friday, will take the competitors 692km (with 447km of racing) from Tupiza to Oruro.