The speedster and his hastily assembled relay team narrowly miss the SA record as Anaso Jobodwana gets going in Germiston. 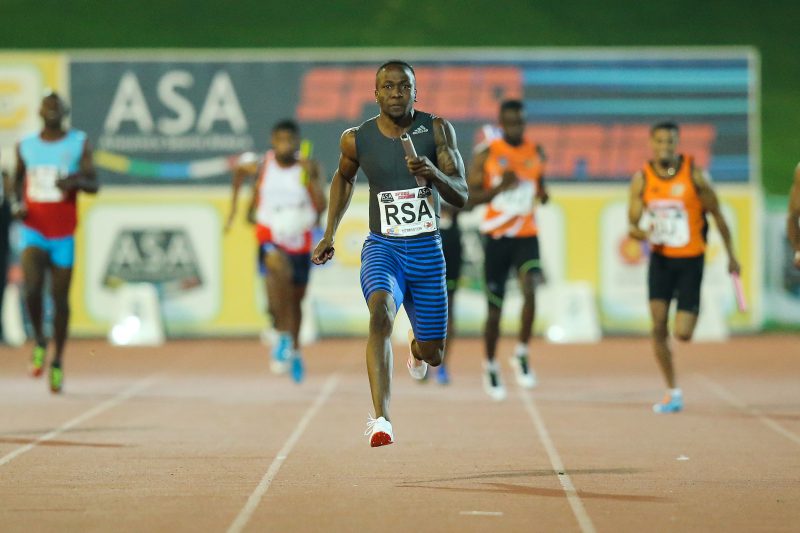 Akani Simbine anchored the national relay team that narrowly missed out on the SA record at the fourth leg of the ASA speed series in Germiston on Wednesday. Photo: Roger Sedres/Gallo Images.

A national 4x100m relay team narrowly missed the SA record at the fourth and final leg of the ASA Speed Series in Germiston on Wednesday night.

Competing as a team for the first time, they covered the one-lap sprint in 38.47 seconds, equalling the second fastest time ever run by a national relay squad.

They were 0.12 shy of the SA record set in the final of the 2014 Commonwealth Games in Glasgow by Simbine, Bruintjies, Simon Magakwe and Ncincilili Titi.

“With the little training that we’ve had so far, we’ve done quite a good job, and if we get more training (as a relay team) in the build-up to the World Championships (in London in August) we can get sharper and make sure the time is lower,” Simbine said.

Earlier, Jobodwana had recovered from a poor start to win the individual men’s 100m race in 10.36.

“I don’t like to make excuses. It was just my start and I’ll have to look back at the race again and see what happened,” said the SA 200m record holder, who missed most of the 2016 season due to injury.

“My last part was really good, but I’m still not getting intensity in the first 20 metres, so I just have to focus on that, go back to the drawing board, and hopefully by the time I get to nationals (in Potchefstroom next month) I’ll be in a much better position than this.”

In the women’s short dash, teenager Tamzin Thomas stunned national champion Alyssa Conley to win by 0.06, crossing the line in 11.54.

After a superb start in the men’s 110m hurdles, Antonio Alkana hit two barriers and lost momentum, though he held on to win the race in 13.52.

And in the men’s long jump, African champion Ruswahl Samaai hit the eight-metre mark, securing victory with a best leap of 8.00m.