Viva national pride! Is the Proteas culture ditching the IPL?

Quinton de Kock will miss the glitzy tournament due to injury, but some stars are doing so to concentrate on the national cause. Happy days? 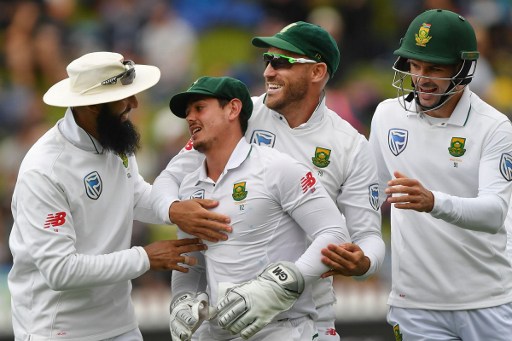 Quinton de Kock is touch and go for the third Test against New Zealand and will probably miss the IPL. Photo: Marty Melville/AFP.

Quinton de Kock, obviously by accident, has continued an interesting recent trend at the Proteas regarding the Indian Premier League (IPL).

Team management on Thursday confirmed the talented wicketkeeper-batsman will have to undergo a late fitness test before Saturday’s third Test against New Zealand in Hamilton due to a finger injury.

While there’s no fracture, De Kock did sustain damage to a tendon.

He could still play in the Test but then he needs a “protected period of recovery” for 4-6 weeks.

And here comes the interesting part: it means De Kock will miss this year’s IPL.

He’s the third high-profile Proteas player to (probably) withdraw from the lucrative but tiring T20 tournament after JP Duminy and Morne Morkel decided to skip this year’s edition.

The important thing to realise here is that Duminy and Morkel said their decision was based on preparing themselves for South Africa’s tour to England and the ICC Champions Trophy mid-year.

“If you’re 21, the current schedule is probably a dream but if you’re 30 and married it puts a strain on family life. Him (and Morne) have done this purely to freshen up mentally. In the long run it’s in the best interest of South African cricket and JP Duminy.”

These moves are even more significant if the past is considered.

Previously, Proteas stars didn’t dare miss out on the IPL.

There, the players renewed their commitment to the national cause.

It’s shown in their performances this year as well as these decisions to ditch the IPL.

Is the tournament losing its appeal?

“But we know it’s good and bad for the players. It’s a great stage to develop but there’s also the chance of injury and mental fatigue.

“I still maintain too much cricket is being played. At some stage the standards are going to drop.”

At least Duminy and Morkel are trying to prevent that.