Le Clos returned to his long-time home of Durban to secure gold in the 200m freestyle final in 1:46.84. 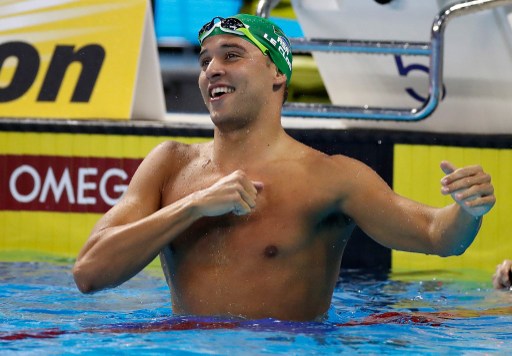 Chad le Clos turned the tables on former training partner Myles Brown on Wednesday evening, booking his place in the national team for the World Championships later this year, on day three of the SA Aquatics Championships in Durban.

Le Clos, who moved from Durban to Cape Town late last year, returned to his long-time home to secure gold in the 200m freestyle final in 1:46.84.

Brown, who had clocked the fastest time of the semifinals (1:47.51) to qualify for the global showpiece in Budapest in July, settled for second place in the podium battle in 1:47.55.

Le Clos also set the fastest time ahead of Thursday night’s 200m butterfly final, with the former Olympic champion finishing 1.31 seconds ahead of Brown in the penultimate round, touching the wall in 2:00.88.

Cameron van der Burgh, the only other swimmer to qualify thus far for the Budapest spectacle after achieving the standard in the 100m breaststroke earlier in the week, was the fastest qualifier for Thursday’s 50m breaststroke final after winning his semifinal in 27.06.