Rules are rules as his dominant performance in Durban is overshadowed by a controversial (but fair) technicality. 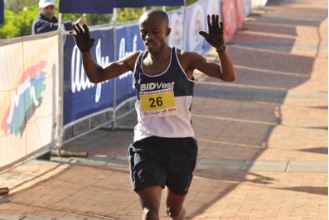 Raphael Segodi was stripped of the national marathon title on Sunday, shortly after crossing the line well clear of his nearest opponent at the SA Marathon Championships in Durban.

Segodi led from start to finish in a dominant performance, but after falling at the start he said he lost his licence number, and though he ran with it in his hand, the race referees scratched him from the results for not having it pinned to the front of his vest when he crossed the line.

“I started with my licence on but I fell. Someone tried to help me by holding me and they pulled off my licence.”

While his Central Gauteng provincial team filed an appeal, the decision was upheld.

“They said in the appeal hearing that he should have stopped and asked someone to put the number back on for him,” said Central Gauteng Athletics president James Moloi.

Due to the decision, Anele Dlamini was crowned national champion over the 42km distance, despite finishing four minutes off the pace in 2:22:23.