South Africa's Olympic hero already broke one of Michael Johnson's records last year. Now he wants to do so again but this one's harder... 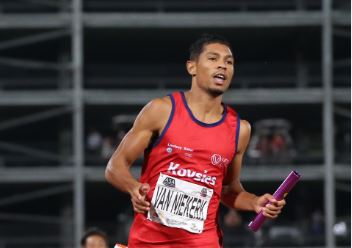 Wayde van Niekerk wants to do the 200m and 400m double at this year's World Champs. Photo: Roger Sedres/Gallo Images.

Though he admits he will have to up his game by stretching his programme across two individual events, Wayde van Niekerk is looking forward to a new challenge this year as he targets a historic double at the World Championships in London in August.

The International Association of Athletics Federations (IAAF) confirmed last week it had agreed to adjust the schedule in order for Van Niekerk to make a rare attempt at the 200m and 400m sprints at the biennial showpiece.

“I am very excited to be attempting the double,” Van Niekerk said.

“It does mean that I have to work harder in the build-up to London.”

Van Niekerk, who set the 400m world record of 43.03 at last year’s Olympics, was set to defend his one-lap title in the English capital.

And with the first round of the men’s 200m being shifted back a day at the global spectacle, the versatile speedster confirmed he would target both events.

Van Niekerk, who was fourth in the 200m event at the World Junior Championships in Moncton in 2010 and lifted the African senior crown in the half-lap dash in Durban last season, will attempt the double for the first time at a major championship.

American legend Michael Johnson is the only man to have earned the 200m and 400m gold medals at the same edition of the World Championships, after winning both finals in Gothenburg in 1995.

“I’ll have to deliver some fast times during the European season to build some confidence against the big boys in the 200m,” Van Niekerk said.

“I also need to work on improving my 400m performance, but I’m looking forward to the challenge.”